(Part 1: How people and machines came to be in relationship together and the Gig economy)

It is not hard to see that employment is changing rapidly and shows high volatility worldwide. Many employees feel like they are on an employment roller coaster that takes off when they least expect it.

To make sure you don’t wake up one day jobless and without options, it is important to stay on top of the future of work trends. Click To Tweet

According to the PubLoft Blog, there are basically two sides to the future of work currently: freelancing and the robot/AI/automation revolution, often referred to as the Fourth Industrial Revolution. Since there is a lot to say about both sides of the future of work, in this article I will focus on the freelancing part of the story.

My next article will explain more about the Fourth Industrial Revolution AND how people skills fit into the picture. Where the two sides of the future of work come together is in the story of how people and machines evolved from being used as tools to being in in relationship with each other. What??? Yes, that is what I meant. People as tools, machines as tools and now they are “in relationship”. I’ll explain more later.

But first, you may be wondering what the other three industrial revolutions were – let’s clear that up before moving into the future of work and how it affects you and me.

How many industrial revolutions are there and how did they happen? 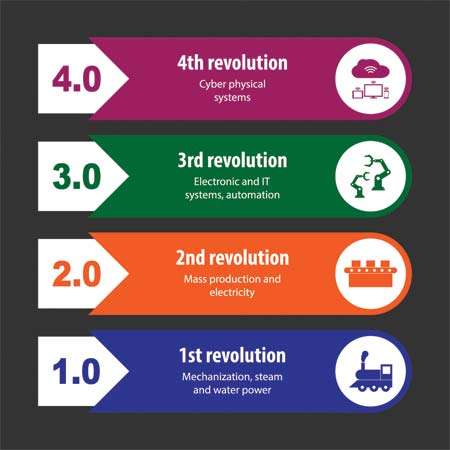 Originally there was no “economy” to speak of. People hunted and gathered and this led to hunting societies who moved to find their food sources and agricultural societies who grew their own food in one place. Somewhere in between, the two types of peoples started trading back and forth and eventually money was invented to make transactions easier. This was called the “family” system of economics and it was based on feeding your family and contributing to the tribe. Contributing to the tribe in turn helped your family to have better food security.

The next evolution was the specialization of jobs and goods. Since money could be used, people were now able to pay one person to fix their sick animals and another person to weave their fabrics. This became the beginning of collectives for specialized workers, or guilds. All this took place over thousands of years without much change.

Then machines were invented and energy switched from horse power to steam power. This allowed for mobility power. Sending goods far away on trains and steam ships became possible. It didn’t take long to realize this accelerated movement could be an advantage for anyone who knew how to harness it for access to new markets.

Steam power would be essentially known as the beginning of the industrial revolution, which really took off when oil and gas started to replace coal and steam power. At that point steel had become big industry and thinkers like Taylor and Ford began explaining their theories of how to use automation and people to drive economic goals. Usually in that combination of people and machines, it was the labour of a lot of poorly paid and exploited people who created wealth for a select number of individuals.

This arrangement of many people in deplorable conditions to create luxury for a few, has continued mostly unquestioned for well, thousands of years but really on a big scale for the past 200+. It started to change with the technological revolution, nuclear energy and the rise of electronics and telecommunications. Machines could replace most manual labour and repetitive jobs, the middle class emerged, and with more disposable income, the masses turned to purchasing power.

Nations whose economies had been considered “emerging” such as China and India, became significant economic and political forces. Even so, with increased monetary gain for the rich and the middle class came the first signs that a thousand-year exploitative relationship between the rich few and the poor masses was changing. Because of the increased automation and technology, volatility has come to increasingly characterize our experience of work.

Many people are still crying that automation is the end of jobs. But let’s consider this development from another angle; there is now a sizable shift in the power balance between the inordinately wealthy few/nations, and the new middle class/emergent economies (although the grindingly poor have yet to see any benefit).

Enter the internet, virtual worlds, and the explosion of technical skills that allow people to work virtually. If you have the skills, you can provide surgery with haptic technology to guide machine hands as if you were physically in the room with your patient. Podcasts and YouTube videos guide farmers in new remote regions for understanding new farming techniques. And employers looking for fast and skilled jobs can hire someone to do almost any design, marketing or video work anywhere in the world for any project. This means things like the internet of things and “smart” cities can be developed, in larger and larger percentages, by an army of virtual workers.

This is the gig economy in which we now live. And it is a relationship between people and machines, the use of virtual tools and people’s thoughts, that has never existed before! Click To Tweet

The 4 stages (actually 6 if you count pre-machine) of the industrial revolution are:

Here is my main point. An interesting piece of this emerging people and machine/technology relationship, is that it provides individuals – and groups -with an economic power that used to only be accessible by the rich. Think about it – in the 1700’s you could only use steam power if you were a king who had made a lot of money off the backs of his tax payers. If you had made money from steam, or could convince the steam power people to fund you, it was possible have the riches to make money from oil and gas.

But now that has changed. You can make a few dollars or a ton of money sitting at your laptop in a café with only you as your own employee. The gig economy means that you and I  – if we are savvy enough to pinpoint our marketable skills – can do the work we want for the people who want to pay us for it – with no employer, no middle man. That, my friends, is the freelance, or “gig” economy. And it is getting bigger all the time.

The Freelance or Gig economy and how it affects everything

Upwork and the Freelancers Union published a USA report on freelance statistics in 2018. 56.7 million Americans are choosing to freelance and spend 1.7 billion hours freelancing weekly. 61% choose to freelance rather than being forced to out of necessity. You likely already know that almost everyone prioritizes lifestyle over other employment benefits. 84% of freelancers say they have the lifestyle they want in comparison with 61% non-freelancers. One of the current gig economy jobs that has really taken of over the past few years is the Virtual Assistant.

Freelancers value skills training over a formal education. They have more anxiety but generally better life balance. They are more politically active, find they have more opportunities and are enabled by technology to fulfill their lifestyle ambitions. 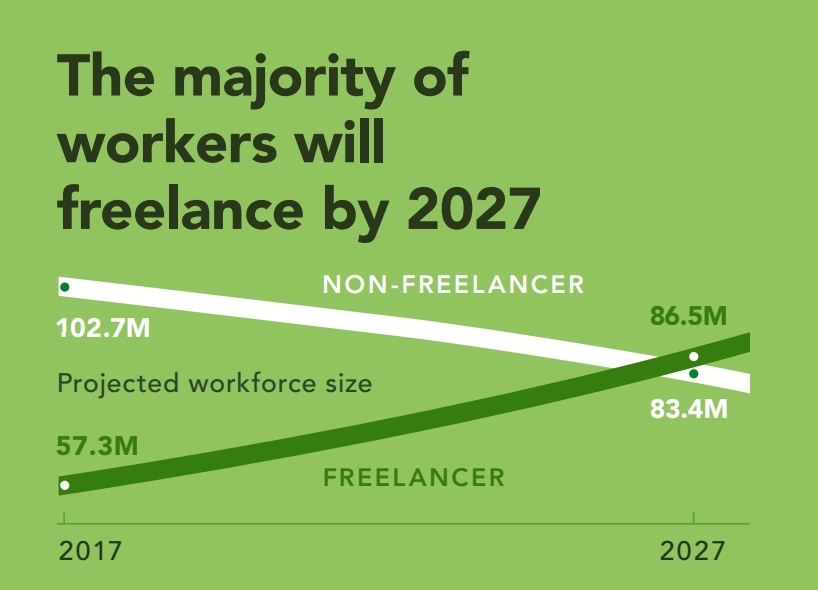 Think that freelancers are only a “thing” in North America? Think again! Here are some of the characteristics of 21,000 freelancers surveyed from 170 countries:

If you are wondering how to get started taking advantage of the gig economy, here is a great list from Niche Hacks.

This list is likely giving you an idea of what is working now, but don’t restrict yourself to what is working now. Remember this article is supposed to help you focus on the “future” of work. Forward thinking people are always looking for what is coming next and how they can use their skills to find their next gig. Never allow yourself to become so busy trying to make money at a low wage that you forget to keep upskilling for the next piece of the future. The movie “Hidden Figures” about the African American female mathematicians who were able to be the first IBM programmers is a perfect example of what to do to stay in front of the future of work. They saw the future as being computer driven. And they prepared themselves to be the first “go-to” employees who had the know how to program those first IBM computers instead of waiting for their manual calculation jobs to grind to a halt. This made them invaluable for NASA at the time.

You don’t need to be a computer programmer to take advantage of the gig economy. A great example of someone who pinpointed his marketable skills and grew his gig into a business, is the “Men in Kilts” story.  Nicholas Brand started a national window washing business using his knowledge of cleaning windows to create the most successful window washing franchise in Canada. He leveraged his people skill, tools, willingness to learn from others, and his ability to grow an idea, to rise from a one-man window washer to a branded multi-million dollar business with hundreds of franchise owners running out of a central but individualized internet hub. Everything is managed virtually and seamlessly through a finely tuned relationship between technology, machines and people to create a customer experience second to none.

The message is clear: if you want to have some job security, there is one important path forward in the current and future economy that you need to think about. Click To Tweet

Get going on freelancing. Have a source of income that is not dependent upon any employer but you. And for that you need to start thinking about how you and your skill set can build a relationship with technology, virtual tools and the power of your imagination. Don’t do it alone. There are lots of opportunities to connect with other virtual workers most of whom are happy to connect, collaborate and mentor. But do get started. The time to get into the gig economy is now.

The Future of Work II: Is There a Relationship Between Industry 4.0 and Emotional Labour?

Marie Gervais, PhD., CEO of Shift Management Inc., provides managerial training and workforce interpersonal development to business and industry through online courses and web coaching. She helps individuals and organizations build talent and skills for leadership, communication, and conflict resolution particularly at the supervisory and middle management level. Her work has gained a reputation for excellence in integration and inclusion of the diverse workforce. With her team at Shift Management, Dr Gervais helps clients reach their business goals through team building coaching and industry-specific training development for interpersonal leadership skills. Her impactful digital and multi-media resources have been successfully implemented with many different populations and contexts.  The results prove that a learning workplace is a happy and profitable one!

Check out Marie’s podcast Culture and Leadership Connections on Apple Podcasts and on the Shift website to hear stories of leadership and all things cultural. Consider the signature Supervisory Leadership Certificate Course for upskilling your workforce at:

The PubLoft Blog: The State of the Future of Work 2019