E27 Everything Is Under Control with Martin Kerr 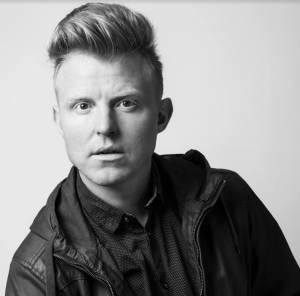 In 2017, British-Canadian singer-songwriter Martin Kerr went from busking to selling out The Winspear Centre in Edmonton, then opening for Sarah McLachlan at a 20,000-seat stadium and landing his album in the Canadian Top 10. Equally comfortable going solo or fronting a philharmonic, Martin finds himself traveling all over North America performing for different communities and has racked up passport stamps from 35 countries on his musical travels.

British-Canadian singer-songwriter Martin Kerr never wanted to have a real job, but he always loved to sing. Dropping out of university shortly before getting a degree, he followed his sweetheart to Canada. Listen in on how he went from being a troubadour to booking 2-3 shows a week.

Martin gets his love of music from his parents. He was 5 years old when he first performed as the lead in his school Christmas play singing 6 solos. He experienced how his voice moved the audience to tears and made his parents proud and inspired him to make beautiful music.

At 13, he performed an original song about falling in love at the school talent show. Although he was nervous about pouring his heart out to cynical teenagers, he received adulation for his creative and sincere self-expression. He did not win, but that incident taught him “to be brave and to try something… but also not to care about the results.”

Martin grew up in the market town of Oaken in the East Midlands in England, with long-term friendships, time in nature, and a slow pace of life. However, it was not a diverse place. “In many contexts, me with my red hair and strange religion, I was the diversity and was kind of used to being picked on for being different, which was not something that a white boy would often have the experience of,” he notes.

The most influential people in his life and his strongest role models have been women – mother, sisters, and teachers. He believes that his ability to ask for help easily, to express himself freely, and to be self-assured as a father come from a gender-neutral upbringing. “I was never discouraged from expressing any so-called ‘feminine traits’ and I think that allows me to be very comfortable with my own skin,” he observes.

Martin’s strongest sense of identity comes from being raised in the Baháʼí Faith, taking every opportunity to be of service to society and seeing himself as a world citizen before all else. Even though he considers the world his home, he recognizes the privilege the British passport has lent him, allowing him to travel with “an attitude of possibility and idealism”.

He also credits his faith with his musical and lyrical abilities. The prayers he grew up reciting lent him a rich vocabulary and helped him develop his poetic skills. He claims he developed a stronger grasp of the language earlier than most children his age and was able to express his feelings, thoughts, and emotions more clearly because of the literary exposure.

His father instilled wanderlust in him, passing on the fascination he had experienced while living in Singapore. He gifted Martin a map of the world to unlock a curiosity of the world beyond the one he knew. As a manager of the Baháʼí Publishing Trust, Martin’s father would take him along on business trips. Driving around Europe with boxes of books in the trunk was a pivotal experience for Martin.

Being a businessman feels foreign to this artist-explorer, but Martin admits that running a business is not as cut-throat and scary as he thought it would be. He is pleasantly surprised by how much help pours in from different corners. Though being an independent artist can be lonely, he takes joy in collaborative projects and learning new ways of working.

Martin believes in being in the moment and experiencing life with spiritual mindfulness. This makes him “allergic to scheduling”, wanting to be open to spontaneous experiences. His unconventional career choice came from not wanting to be bound to monotonous tasks every day. However, he misses the self-discipline needed to run a successful music business.

His stable and positive upbringing has made him believe that the world is a safe place and has led him to form his motto, that “everything will work out and that I’m going to be alright.” This allows him to take on new experiences and meet new people with freedom and take risks with a little bit of irreverent rule-bending.

He has a taste for novelty, diversity, and adventure, which draws him to meet new people. Although he expresses great interest in new relationships, he confesses to not being good at maintaining friendships in the long term. “The challenges that you encounter long into a relationship… are quite different to how it feels as you’re just getting to know somebody,” he remarks.

Martin experiences differences of opinion palpably on social media, even within so-called cultural groups. His manager, too, comes from a different culture, and even though they grew up in the same way, they disagree on some matters. When a conflict of opinion arises, he finds it productive to focus on building something together.

When he was travelling in China in 2011-2012, the locals showed great interest in him as the tourist and considered his behaviour to be representative of everyone in the west. As someone who left behind everything and everyone to travel, he was already an outlier in many regards and found himself constantly explaining that other westerners were not like him. “I’m by default representing my country but [I’m] also quite different from a lot of the norms I’ve left behind,” he laments.

He finds the positivity of Canadian culture in stark contrast to his hometown in England, where there was little tolerance for being different or defining one’s one way of life. The space that Canada offers, both literally and metaphorically, “can make your worries and troubles feel appropriately small… and give you a sense of time and possibility”.

Martin’s advice to an employer is to be direct with him – “say what you mean the first time.” He invites questions and appreciates when people are direct. Having spent many years in the music industry, he is not easily offended and values honest feedback.

Martin has released his new album, ‘Everything Is Under Control’, with producer Ryan Stewart (Carly Rae Jepsen, Owl City). Its carefree, toe-tapping first single and most lighthearted track of the album, You’re Amazing, is guaranteed to bring a smile to anyone you share it with. It has earned radio play across Canada, the UK and the Netherlands and climbed to #4 on the Spotify Viral Chart. Another fun song, Isolation Groove, is meant to help people get over some of the loneliness of the pandemic.

Everybody loves music: A British-Canadian singing sensation shares his journey on connecting with people heart-to-heart.

From a 5-year-old star in a Christmas play to a 13-year-old love ballad to an internationally renowned singer and songwriter, Martin Kerr has spent his entire life touching hearts and spirits with the power of his voice. His experience growing up with a world citizen consciousness in a small English village set him up to pay attention to both the micro and the macro, developing an ability to take tiny daily actions and turn them into universally applicable tearjerkers or stinging commentaries on social justice. Martin leads through voice and emotion, but he is grounded in a powerful spiritual reality that shapes and forms his sense of self, culture and leadership – the teachings of the Baháʼí Faith, from which he derives foundational beliefs about the elimination of prejudice, the equality of women and men and the independent search for truth.