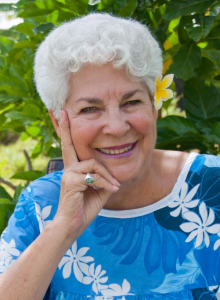 Linda Kavelin-Popov is the co-founder of The Virtues Project which is in over 120 countries, and the bestselling author of 7 books, including The Family Virtues Guide, with which she was featured on the Oprah show and many other talk shows. She is a columnist for Lana’i Today, and writes a column called Virtues in Paradise.

After attending St. Lawrence University and Columbia University, she became a psychiatric social worker, and later developed programs for suicide prevention in her private practice. She was a cultural change consultant to organizations such as Arthur Young International and the U.S. Department of Health and Human Services and served as a hospice spiritual care director.

Linda met her husband in a serendipitous way, with synchronicities which could not be denied. She has two sons and five grandchildren, and they live in Lana’i, Hawaii.

Linda Kavelin-Popov has crafted her life based on her beliefs and always followed divine guidance. Listen in on how she has received a lifetime of returns from a lifetime of service.

One of the most defining moments of Linda’s life was when she was 5. She remembers circling her backyard slowly, praying, “God, when I grow up, please let me help people.” She followed that calling into social work and into creating The Virtues Project based on respect, love, and service.

Raised in the Baháʼí faith, Linda and her brothers did not conform to racial divides in their Long Island elementary school cafeteria. Even though they were teased, they sat with their friends at the lunch table, irrespective of their races. They also learned to be tolerant of other children’s lack of understanding of their behaviour.

At the age of 12, Linda gave a talk to her friends about oneness of humanity and the equality of men and women. Even though it was a tough audience, interjected by two young men who came to challenge her ideas, she welcomed their questions and overcame her fear of speaking in public.

The most influential group Linda belongs to is the Baháʼí community. She was raised as a world citizen, called to be of service to humanity. Since her mother struggled with psychological issues and her father travelled a lot, the Baháʼí community gave her the encouragement, love and mothering she craved for along with “a sense of worthiness”.

Refusing to accept racial discrimination as it prevailed in the USA, she made the African American community her own, reading books on the topic and serving on the boards of their companies. She has also always had a strong sense of sisterhood – with the Lana’i women’s circle she started, the women’s retreats she held and the British Columbia Sisters of St. Ann group she was welcomed into. “Friendship is essential to me”, she states.

Learning how to listen to her mother in her severe depression since the age of 4 inculcated empathy in Linda. 10 years ago, when her brother/best friend/colleague, John, was diagnosed with terminal brain cancer, she found his pain unbearable. He advised her to trust and not to let empathy get the better of her because he noted, “I have the pain, but you are the one suffering!”

Linda believes that “life on earth is spiritual school’. She has a rich inner life, a strong reflective practice of prayer and meditation and continually seeks teachable moments in life. She defines herself as a practical mystic, someone who asks for divine intervention and acts on it practically once she receives clarity.

Linda realized that her family was unique in that they would discuss the big questions of life even with children. When she visited her friends’ houses, their parents would be surprised by her answers to questions about God and world unity.

Befriending people of different faiths has been an enlightening experience for Linda. Over her travels, she realized that Europeans frown upon religion whereas Australians are open to learning about verses from sacred texts. She finds it interesting that even though people want to learn about virtues, they do not want to discover their spiritual source.

When Linda conducted in-depth healing retreats for first nations men who were in treatment for alcoholism, she was surprised with the tenderness they exhibited. She realized that she was holding a preconceived notion about men and their ability to trust.

Linda was working with the cabinet of the Prime Minister of Vanuatu, where children are taught in school not to speak up. When she would ask questions during a seminar, she would be met with silence but she learned to put them in small circles so they could speak freely and discover their virtues.

A way in which Linda connects with people across cultures is by building trust and a sense of safety. She reveals an authentic story in her life, a teachable moment she is experiencing, and how virtues are helping her. “I reveal myself, and I listen,” is her mantra.

Linda thrives on mutuality. She wants both people in a conversation to be listening and contributing. She appreciates questions because it shows interest in her beliefs and feelings. She dislikes feeling misunderstood, misquoted, or made assumptions about.

In 1988, Linda co-founded The Virtues Project with her husband, Dr. Dan Popov, a pediatric clinical psychologist and her brother, John Kavelin, a Disney Imagineer. Wanting to be of greater service to the world as a family, they were inspired to create a project based on a set of 5 strategies to bring virtues into all aspects of people’s lives:

You can purchase Linda’s books and the virtues cards from www.virtuesmatter.com and www.virtuesproject.com. Look forward to her new book, The Freedom Season: Dreaming at the Crossroads, coming soon!

Curious instead of furious: An elder shares her journey with starting a project based on virtues, sparking a revolution of kindness, integrity, and resilience.

Linda Kavelin-Popov has taken the virtues she learnt from her childhood experiences and her faith and created a beautiful project which will help people across the world find meaning and solace in their own lives.

Everything Is Under Control with Martin Kerr