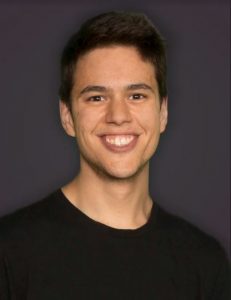 Devon Riel went from being an elf at a local shopping center photo booth to Events Manager (Special Events Digital Photos) to finally the General Business Manager at Avonlea Group of Companies, where he also does sports photography alongside event photography. His work involves approaching real-bearded older men on the street and training 45-60 of them to be Santas if they are willing!

Devon says that a good Santa has energy, enthusiasm, and takes ownership of the role. The best Santas are the ones who feel like they are the real Santa, though they may sometimes go to weird extents to show it! However, some Santas don’t embody the character well, and they are asked to leave. “They way culture is these days, it’s a character role that can only be filled by a certain segment of society”, Devon notes.

Devon Riel comes from an illustrious lineage yet has carved his own way. Listen in on how his job training Santas has helped him illuminate his own and others’ paths with joy.

Devon found his parents’ separation when he was very young to be beneficial to him, since he witnessed almost no conflict. He observed that his half- or stepsiblings, who were between the developmentally sensitive ages of 3-6 when their parents split, were rebellious, angry, and difficult to deal with. However, those whose parents split at the same age as his were well-adjusted. “The younger they were when their parents separated, the less they were impacted by their separation”, he observes.

Devon attributes his technological success to his mother. She bought him a computer when he was young, and learned everything she needed to, to pave the way for him. He believes learning computers at a young age gave him an advantage in the technical world.

Louis Riel, a Métis political leader who founded the province of Manitoba, is Devon’s great-great-great uncle. However, he says that other than the genealogical spiritual connection, he has not felt any direct impact since his father is not culturally tied to the Métis community. His mother comes from the Powell family and they may be descendants of the Baden-Powells, the founders of the Boy Scouts/Girl Guides Movement.

Devon attended 8 different schools from kindergarten to Grade 12 because his family moved often. He also moved to Australia with his mother in Grade 4. He couldn’t form long term friendships because of these changes, but he considers that as a trade off to the variability and “flexibility of different upbringings”.

He began working in banking immediately after high school and took finance at NAIT (Northern Alberta Institute of Technology). Even though working in the field at a young age taught him valuable lessons in professionalism, the rules and regulations of the sector made him feel distant from it. Around the same time, he discovered Business Network International (BNI), a networking group his mother attended, and was introduced to Dean Skoubis, one of the owners of Avonlea.

Devon says that his temperament can be summed up by the phrase “rose-coloured glasses”. He had always been a happy child and the class clown. He takes joy in giving joy and putting a happy spin on anything that comes his way. His work fits in well with who he is as a person because it allows him to bring joy to many people. However, he has worked to temper down his hyperactivity to make sure it’s not overbearing to other people.

Devon says that he has always felt he was different from everyone else. “A lot of it comes down to parental brainwashing on my dad’s side because he didn’t want me to be normal”, he says matter-of-factly! He feels immune to the cultural and societal norms which dictate a certain kind of life, and refuses to be driven by them.

Devon says that even though he doesn’t like micromanagement, he works well with direction. Since he is technology-oriented and assistance-focussed, he likes well-defined processes. When he follows up with someone, he expects them to be there, though he admits he is not the best at following up with people.

His scientific mind also feels passionately about keeping arguments on a feeling basis rather than a factual basis. “Unless something is a fact, it shouldn’t be stated as a fact”, he notes.

Devon’s favourite job is to take headshots because he loves “bringing out that pure joy in someone”. He is adept at gleaning the perfect level of trust in someone’s smile to make them look accountable in their business. If you or someone you know needs headshots in Edmonton or around, contact Devon!

The desire to be Santa: A photo booth company manager shows us what it takes to make the perfect Santa.

Devon Riel is one of the few people who can say he developed his career and business acumen because of Santa! From the influence of a strong mother to the ancestral context of the Métis community, Devon has built a unique and locally dominant photography industry specializing in events and sports teams, where he can use his skills bridging cultures and keeping multiple stakeholders happy. He uses his photography, project management and tech savvy to efficiently run both events and a large workforce while continuing to perfect his photography skills.

If you would like to provide an audio testimonial about a Culture and Leadership Connections podcast you found particularly inspiring, useful or insightful, send me a voice message at AMGEDUC on Skype. I look forward to hearing from you!

Hypnosis and Healing with Colin Christopher

Further from Football with Alex Molden