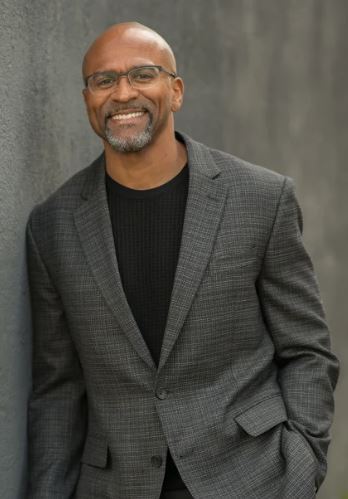 Alex Molden is a leadership and personal development coach and speaker. After sustaining a devastating knee injury in college, overcoming hurdles both on and off the field, being drafted in the 1st round of the 1996 National Football League (NFL) draft in the USA and beating the odds to endure an 8-year NFL career, Alex has dedicated himself full-time to sharing his message of overcoming obstacles, finding yourself and being the leader you were destined to become. Whether as a keynote speaker or a workshop leader, he helps break through the boundaries that are limiting teams from reaching their full potential.

As an NFL player, Alex Molden had failures and successes, coaches and friends, and most of all, life experiences and stories to treasure. Join him as he talks about life before, during and after football.

Since Alex’s father was in the army, the family moved houses often, and Alex didn’t get to play organized football till 8th grade. However, he had been playing football in the streets before that without knowing any of the terms or rules. He researched the positions in football using encyclopedias, which spurred his passion on. He had always assumed that he would join the military like his father, but when he found out about athletic scholarships in 10th grade, he made football his single-minded focus. He surrounded himself with football players whom he could learn from to “make… [his] dreams a reality”.

He received a Fulbright Scholarship to attend the University of Oregon towards the end of his last year in high school. Since he knew he had secured a place in college, he began to slack off in school, skipping classes and not studying enough. His biology teacher, Mr. Keele, was a former marine who valued hard work and sincerity above all else. On one of his weekly Friday quizzes, there were 5-7 essay questions based on the topics completed that week which Alex hadn’t prepared for, and thus performed poorly.

When Alex went up to his teacher to have his test graded, Mr. Keele made so many red marks that Alex thought “he slit his wrist and he was bleeding all over… [his] test.” With an F on his paper, Alex felt embarrassed that he was unprepared and showed lack of character in front of a teacher he respected and looked up to. His teacher spoke to a crying Alex for what felt like a long time, and the words stayed with him forever:

“Alex, this is not you. This is not part of your character… I want to give you another shot at this but you’re skipping classes. And people are going to be giving you passes, they are going to give you free passes because of your talent, because of your athleticism, because you’re a pretty good football player… But there’s a time when nobody’s going to care how good of a football player you are, and you need to show up and you need to start doing, just like everybody else. There’s going to be a time when football is not there for you. And what type of person are you going to be?”

Alex decided what kind of marriage he didn’t want by seeing the abuse and alcoholism in his parents’ relationship. His father had been forced to grow up at an early age when he lost his father to a heart attack, plus the army reinforced a culture of inexpression. “There wasn’t a whole bunch of hugging going on, there wasn’t a whole bunch of – son, I love you”, recalls Alex.

Alex believes that the friends one has between the ages of 14 and 18 help shape a person. In high school and as a freshman, he spent time with people who influenced him to smoke weed and skip school. A month after acting in a way which made him feel he couldn’t recognize himself, he looked in the mirror and asked, “Who are you? You’re not that Alex that once did the most out of life.” He made a change after that and began spending time with other athletes who worked hard to be in college, and who would challenge him to be the best version of himself.

Being a twin, Alex has always been competitive with his brother. Once, he bullied his brother, which instigated him to stab Alex. Seeing that he had used his strength negatively with someone he loved changed Alex and made him develop the ability to take a deep breath and think about other people’s feelings before acting.

The locker room culture in the NFL made Alex feel uncomfortable. In his first week in the NFL, a veteran player commented on how Alex needed to fix his crooked teeth in front of the other players. Three weeks into the year, his head coach suddenly quit after a long stint, which left everyone shocked.

There was also a palpable difference between the culture created by each of the coaches he had versus the culture of the players. One of his head coaches was famous for taking his previous team to a Superbowl victory, but it was the worse coaching experience Alex had ever had. Another coach had a college mentality – he used silly cheers for the team during speeches and would be arm twisted by the other players into reducing practice hours.

Alex uses his life stories to inspire dialogue, impart tools to drive cultural change and teach leadership to impact lives. He has worked to glean the important lessons from his life stories so they can help others. If you are just looking for a cool story about a football star, Alex says he may not be the right person for you.

When Alex retired in 2004, he wanted to take a sabbatical but that quickly became boring. He applied for a role at a non-profit in Portland and was asked to come in for an interview. He hadn’t researched the company, even though he had learnt to research his opponents in football. He couldn’t answer any questions about the company or himself well. The woman interviewing him told him he wouldn’t get the job but also gave him few words of advice: “Before you do any other interviews… find out exactly who you are. Because right now, sweetie, you don’t know who you are.” Even though he’s been cut from NFL teams in a humiliating way, nothing had embarrassed him more than this situation and it made him cry.

However, it also made him want to discover himself. “I knew football, I didn’t know Alex”, he notes. He approached a personal coach and till today, believes that it was the best investment he ever made. Coaching helped him find himself, become a better person, and be the most authentic version of himself. His coach helped him realize that he was transactional in his relationships, and treated people with influence differently than the average person. Having someone hold up a mirror to him encouraged self-reflection and helped him grow.

Challenge people’s thoughts: A former NFL players shows us how he inspires others using stories from his life.

Alex Molden is a great example of staying focused on a single goal and overcoming obstacles in the process, including the surprising obstacle of success and fame as a national football star. He talks about how being so focused on your skills and career excellence can cause difficulties with integrating into other life contexts. A strongly self-reflective and personal growth-oriented person, Alex offers insights into what he learned about himself and about life, both within the NFL and outside it when he began new careers in the performance fitness, not-for-profit and professional speaking industries. His deep experience with all types of coaches in his own life demonstrate the value of coaches and mentors for cross-industry success.