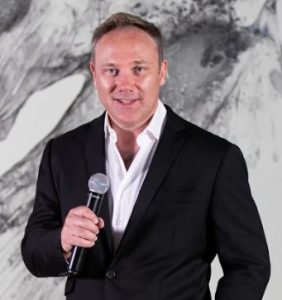 Colin Christopher is a keynote speaker, stage hypnotist and sought-after authority in hypnosis appearing all over the world on networks like ABC, CBS, NBC, FOX, ESPN and many others. He speaks on topics ranging from losing weight and quitting smoking to sales techniques and relationship tips. As a clinical hypnotherapist, hypnosis instructor and author, Colin has also been featured in hundreds of prominent publications like the LA Times, Daily Mail UK, Metro New York, Psychology Today and ELLE.

As a German Canadian, Colin Christopher has been shaped as much by his life experiences as by the groups he chose to belong to. Listen in on how he found himself in odd places – in the middle of the ocean, all alone on the road, and as a hypnotist on stage.

When Colin was in Grade 2, he accidentally knocked his friend’s tooth off while playing during a school recess. Terrified, Colin went straight to his principal to turn himself in, but he was asked to go back to class. When he returned to class, his teacher screamed at him in public for knocking his classmate’s permanent tooth off. His mother later found out from the classmate’s mother that it was a baby tooth, not a permanent one. However, his friends believed the teacher and made fun of him. Colin was badly scarred by the unkindness and humiliation of that incident and became antisocial for a very long time.

Colin credits his high school drama teacher, Mrs. Kwan, for his career as a hypnotist today. She encouraged him to try relaxation using hypnosis in class one day. Encouraged by his friend and influenced by what he had seen her do, he guided his group through a relaxation exercise. He realized that day that he should be a hypnotist. Colin states, “Those relationships that I formed with them – they are the reason I’m a hypnotist now.” He went on to take formal training and establish a career in hypnosis, though neither his friend nor his teacher ever got to see him in action, having passed away before the opportunity arose.

Colin’s parents immigrated to Canada from Germany in the 50s and 60s. That was a time of animosity towards Germans, being so close to World War II. He was heckled and called names for being a German, even though he was born in Canada and in the 70s, leading him to not feel Canadian. The heckling stopped only when he went to university, almost 40 years after the war. After that, when he travelled, he realized how accepted he felt as a Canadian outside Canada, compared to the prejudice he had experienced as a German within Canada.

Growing up, Colin only learned to speak German from his family, and picked up English at the age of 4 or 5 from being around other people and children his age. Although his parents took him to German cultural clubs, German choirs and to German movie screenings, he was repelled by the culture due to a few loud, obnoxious, and drunk older German men at these events. He later realized that their behaviour was only representative of “those specific influences versus… their entire personalities”.

Colin became a part of a vibrant, multicultural group while working on cruise ships, where there were people from 7-8 different countries “working together in peace and harmony”. Everyone got along well with each other. When the entire crew of 800 members came together for a group picture on the deck, the beauty and uniqueness of the unity in diversity touched Colin. He believes that working on a cruise ships bonds people for life, and they share a common understanding of life in the middle of the ocean.

Professionally, Colin is a member of hypnotherapists’ associations and entertainers’ associations. While the former offers interesting training and networking opportunities, Colin claims that only other entertainers understand how isolating the work can be, so they act like his ad hoc family. A lot of his life as an entertainer involves long hours of solo travel and fleeting moments of adulation. Colin says the experience can be overwhelming – “You can talk about it, but until you actually experience it, there’s no real way to prepare you for it.”

Colin claims he has always been quiet. Even though his job requires him to speak a lot, he enjoys sitting back and thinking. Being quiet allows him to step back and analyze life situations by asking deeper questions. His temperament impacts his world view in that it lets him “dissect and analyze the world”. He has invested considerable time and effort into developing a stage persona who is an outspoken performer.

Since the Grade 2 incident, Colin had been antisocial. It wasn’t until he began working on cruise ships when the cruise director told him that socializing with guests was part of his job. He overcame his resistance by approaching people who would not reprimand him if he made a mistake, like seniors on wheelchairs. He began with small talk and ventured further when he received appreciation for taking time out to have conversations. He began developing his social skills to understand conversational dynamics, which were useful later in hypnotherapy sessions.

In Grade 6, Colin learned about the culture of the Aztecs wherein they beheaded a losing team’s captain in games. He couldn’t see the reason why this would be an acceptable practice. As an adult, when he was in Mexico, he visited the site of the games, but still couldn’t agree with the magnitude of the punishment. He reasoned that given the limited resources, they needed to have this structure, but he also admitted that with his different set of resources and values, it didn’t make sense to him.

Colin dated a Caribbean woman from Trinidad and Tobago, whose fibbing culture was in stark contrast to his upbringing as an honest person. It was common in her family, and even expected, to exaggerate or even lie, sometimes for entertainment. That experience was an eye-opening one for Colin. He expected her to tell him the truth because he spoke the truth, while it was a cultural trait for her to bend the truth.

Colin advises anyone looking to work with him for an event or for therapy, to call him on the phone. He likes to set a clear purpose and establish the outcome from the beginning. He can then suggest if he will be the right fit. Colin follows the same methodology in his own work as in his training – “How do we build comfort, safety and trust within the people that are participating in whatever service I’m providing?”

Colin has had a fruitful experience with Business Network International (BNI). He recommends joining the association for networking, receiving referrals for your business and discovering personal connections. Over the two years that he has been a member, he has made friends and established a supportive network. As an entertainer, this group helps him tide over the lonely periods and keeps him accountable to his profitability.

Colin sees clients as part of his clinical hypnotherapy practice for losing weight, quitting smoking, etc. He also conducts a sales training program to help salespeople develop genuine relationships with all their prospects. Contact him for his expertise in any area of your personal or professional life!

Real Selves: A German Canadian hypnotist shares his life stories to teach us how to develop genuine connections.

Colin Christopher has a most unique specialization – that of being able to use hypnosis for both entertainment and healing. The way he discovered his ability to use hypnosis and his subsequent rise to fame in the industry make a fascinating story! Colin is not shy about explaining his own struggles and how he learned from them. He contributes significantly to his industry and serves the business community through Business Network International and through a second business as a high-level event planner.

Share this podcast with friends to enlighten them with his illustrious journey!

Suck It Up, Buttercup with Denise Liebetrau