E44 I’d Rather Rescue Myself with Sherina Mayani 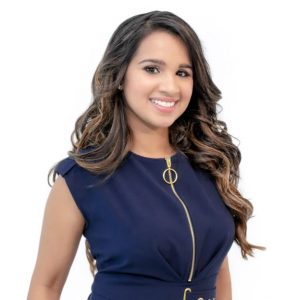 The Fairy Tale Life Isn’t For Me: An Indian-Panamanian business coach shows how to dream bigger dreams than those expected of women.

She helps Spanish-speaking women around the world clear their blocks, upgrade their mindset, attract ideal clients, and earn consistent money so they can grow a business that sets them free and create a positive impact.

She is also a Divine Living Certified Master Coach and an Energy Editing® Professional who helps clear energetic money blocks from your energy system. Panamanian of Hindu origin, she lives in Panama with her husband and their puppy Coco.

As an Indian-Panamanian, Sherina Mayani was raised with little promise of the future. Listen in on how she overthrew the cultural expectations to shine as a female entrepreneur.

Sherina was 9 when she had a life-changing conversation with her father at the dinner table. Inspired by the Disney movies she had been watching, she shared her dreams with her parents but her father told her that she needed to obey him now and later her husband, which she couldn’t imagine doing.

At 16, when Sherina asked for permission to attend a party, her father refused, saying “as long as you live under my roof, you’re not going anywhere”. This made Sherina want to become independent. She googled the fastest way to make money and it led her to become an entrepreneur later in life.

Sherina was born in Panama to Indian parents, who told her that her life would only involve marriage and children. Wanting more out of life fuelled her business dreams. “The cultural contrast actually led me to break free from my culture and now become this entrepreneur”, she notes.

Sherina identifies as a spiritual person and associates with the spirituality ingrained in Hinduism. Belonging to a culture that values spirituality has made her approach her work from that perspective too, always mindful of the karma she is creating.

Falling in love with a non-Indian catholic who was 12 years older than her made her ‘arranged married’ parents uncomfortable. However, Sherina’s maturity, forward-thinking planning and commitment made them come around to accepting her marriage.

Sherina claims that she is very strategic in her approach to every conversation, and her mind roars into action the moment she hears a business idea. She has now traded her impulsivity for wisdom. “I let things boil and when they’re boiling, perfect, it’s ready, versus forcing the boil”, she observes.

At university, Sherina experienced a homogenous environment – people who had the same skin and hair colour as hers. During the summer, though, when American students would come to Panama, she met people with either very light or very dark skin, blonde hair or blue eyes.

She also noticed that Panamanian culture was a lot more laid back than American culture. The American students would always take their homework, jobs and career seriously whereas Sherina says that “we leave things for very last minute or we don’t do it”.

Sherina finds that she is more comfortable working with women since she is a dominant personality and has faced energy clashes with men. She claims her energy works better with women and that she understands them better. “I know women because I am one”, she exclaims.

She prefers working on long-term programs since energy clearing and emotional work take time. She looks for people who are willing and open to the emotional clearing work along with strategizing. “What’s the point of strategy if you’re not in alignment?”, she asks.

Sherina recalls a story about passing down traditions without question and urges us to think about why we do what we do. For more great insights, reach out to her on LinkedIn. She runs many Spanish language programs and some for English speakers too!

Sherina Mayani had to break free from many restrictions growing up in a conservative Indian family. She used her natural strategic thinking and her desire to make something of herself to become a business coach and mentor who helps women become successful entrepreneurs.

The Buffet of Life with Alan Headbloom

The Alchemy of Success with Perry Marshall