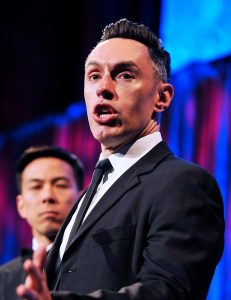 I love a good crisis: A gay communications specialist shows us how he developed the tools to handle crisis through the difficult circumstances he lived through.

Anthony Hayes is President and Founder of The Hayes Initiative (THI), a certified LGBTQ-owned and operated public affairs firm that supports clients, projects, and initiatives across all sectors, including government, which was recently recognized with an honourable mention during the 2021 PRWeek Awards for “Best in Public Affairs”.

Anthony has spent more than 18 years in communications, crisis and issue management and political and legislative campaigns. A seasoned C-level advisor, he has cultivated an energetic, fast-growing company now trusted to execute strategy for prominent clients around the globe.

Anthony Hayes has lived a life of stark contrasts between the private and personal, learning skills to be alert to personal danger while living an outwardly popular persona. Listen in on how he developed a niche in extreme crisis management by applying his own personal discretion to sensitive national and international crises.

Anthony grew up in Enid, Oklahoma at a time when he couldn’t talk about having a crush on his male classmate. He began curtailing his self-expression to avoid harm to himself. He claims that he became skilled at storytelling in order to distract the people in his life from his truth.

He turned to alcohol and cigarettes to numb his pain at age 13 and went to rehab at 16, even though he was funny and popular in school. “I was in… but yet not at all, at the same time”, he notes. He drank again between ages 18 and 30 but has been sober ever since.

Anthony learned a strong work ethic from his parents, who worked very hard for very little pay in a warehouse. His parents were also part of the Church of Christ, where “being gay” was not allowed, which tormented him, but he loved the community, self-development and compassion aspects.

Anthony developed insight, vulnerability and camaraderie at Alcoholics Anonymous, a group he still values for not judging someone at their lowest. It has taught him to share what he needs to stay sober with his friend circle and maintain habits that will sustain his sober lifestyle.

Moving to New York City in his 20s helped him feel at home in a vibrant gay community. He was also encouraged by some older gay men to become an active part of advocacy groups like GMHC, an AIDS-service organization of which he is proud to be a part.

Looking back on his life, Anthony describes himself as optimistic. He would always be willing to participate in any social activity. As an adult, he focuses on being aware of the present moment and living with wisdom.

Being a New Yorker, Anthony is aware that the city can be a bubble of lived experience and political opinion, making residents oblivious to differences outside of it. He laments that most people are not aware of the richness of culture that exists elsewhere in the country and the world.

Anthony enjoys working with clients who respect his expertise and are willing to be vulnerable and transparent about the gaps that he needs to fill. “The thing that helps us help them the most is transparency and as much vulnerability where weakness might lie in terms of storytelling”, he says.

Anthony disagrees with the concept of groupthink and does not like it when people stick to “that’s how we’ve always done it”. He also recognizes when he is needed in a project and when it will do better without him.

Anthony encourages listeners to focus on their mental health and create a life structure that supports it. He and his team love to meet new people with whom they can work. Reach out to him on LinkedIn or through his website to connect!

Anthony Hayes developed sophisticated skills for storytelling, humour and grace under fire, negotiating his LGBTQ identity with compelling social charm to prevent harm and sometimes even death. This tightrope tension put his nervous system under constant stress and Anthony turned to alcohol at age 13, needing to go to rehab only two years later as an alcoholic. He attributes his outstanding success in the international communications and crisis management field to his ability to constantly negotiate his own roller coasters of uniqueness and belonging. The result? A likeable, skilled communicator with insight, humanity, compassion and tact.

Learn To Fly On The Way Down with Richard Matthews