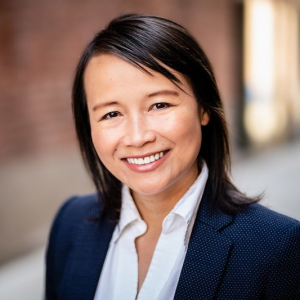 Julie Pham, Ph.D. is the Founder of the 7 Forms of Respect and the CEO of CuriosityBased, which fosters curiosity in the world starting with the workplace. Dr. Pham got her “real-life MBA” by running her family’s Vietnamese-language newspaper, Người Việt Tây Bắc (Northwest Vietnamese News) in Seattle.

She has worked as a journalist, a historian, a marketer, a nonprofit executive, and a management consultant. She is an award-winning community builder who has built partnerships among unlikely allies, such as tech, labour, and government; between ethnic media outlets; immigrant-, refugee-, and people of colour-owned businesses; and between philanthropists and social entrepreneurs.

As a Vietnamese-American, who has travelled and studied in different countries, Dr. Julie Pham has maintained her original curiosity and refugee grit, but grown flexibility and intercultural bridging skills in the process. Listen in on how her myriad cultural influences make her the successful entrepreneur she is today.

Julie was born in communist Vietnam where her father was sentenced to a ‘re-education’ camp for 3 years. He moved his family by boat to Seattle in the US and changed her Vietnamese name to Julie for outside home. However, Vietnamese makes her feel intimate with those who can speak it and say her real name. She learned Vietnamese formally later in life and has a deep appreciation for it.

Her family moved from the city of Seattle into the suburbs just as she entered middle school, which she found to be “transformational” and it helped her build “inner resilience”. It was hard to make friends, and she had an imaginary friend till she entered the gifted track and found a community of her own.

Julie has found the refugee experience to be transformative and takes pride in how her community has achieved freedom by moving to the USA and established a niche for themselves in the economy, creating their own “American Dream”. She also credits her Vietnamese heritage for her optimism and her predisposition to look for the opportunity and silver linings in every situation.

Having moved to the UK for grad school and having lived in Germany, France and Vietnam in her 20s, she considers herself a global citizen. Being an international student sparked curiosity within her while coming from an entrepreneurial background taught her relationship building and gave her high risk tolerance. “There is a feeling as an entrepreneur that if I don’t know it, I will learn it”, she notes.

Julie claims she was always curious about people and asked questions about the world, even though she did not have many friends. In her 20s, she learned the value of generosity, and how helping others be successful also helps her be successful.

When Julie lived in the UK, people spoke of distance in terms of kilometres, instead of in units of time, as she was used to. In Vietnam, she discovered that her friends chose to cancel plans at the last minute even if they knew about a conflicting appointment beforehand, so she would not think they chose something else over her deliberately. She has now become flexible in her expectations.

Investigating how different people have different expectations of how to be treated, Julie came upon respect as the core value and conducted focus groups to explore this further. There are 7 forms of respect – procedure, punctuality, information, candour, consideration, acknowledgement and attention (PPICCAA) and 3 dimensions – hierarchy, directionality and what matters to you.

Take Julie’s online 7 Forms of Respect individual edition self-paced course with transcripts and a workbook, to begin your personal journey into giving and receiving respect!

Dr. Julie Pham came from Vietnam to Seattle as a refugee, after her father experienced persecution and torture in a “re-education” camp. To make a living while meeting the needs of the cultural community, her parents established a Vietnamese community newspaper and showed by example how to build relationships to make entrepreneurship work.

Come to Canada with Chidi Iwuchukwu

Staying Is A New Adventure with Doni Aldine