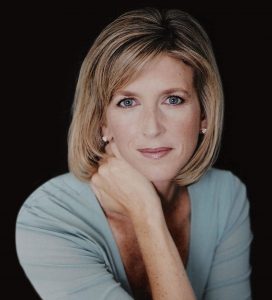 It all boils down to authenticity: A broadcast journalist turned communications coach shows us how to be our most authentic selves, on-camera and off it.

Karin M. Reed is the CEO and Chief Confidence Creator of Speaker Dynamics, a corporate communications training firm featured in Forbes. While speaking through a webcam might be new to much of the world, Karin has been teaching business professionals how to be effective on-camera communicators for nearly a decade, translating her experience as an Emmy-award-winning broadcast journalist and on-camera spokesperson into a methodology based upon the MVPs of On-Camera Success™.

Karin and her team have been the chosen training partner for some of the world’s most recognized companies and most respected academic institutions in the world – from Nike to Lenovo, from Duke University to the Graduate School of Business at Stanford. Her first book, On-Camera Coach: Tools and Techniques for Business Professionals in a Video-Driven World, was a #1 Hot New Release in Business Communications on Amazon in 2017. Her second book, Suddenly Virtual: Making Remote Meetings Work is co-written with Dr. Joseph Allen, one of the foremost thought leaders in meeting science.

As a successful broadcast journalist, Karin interviewed celebrities like Muhammad Ali and Bill Clinton. In 2004, she left the business to apply her skills in the corporate world, helping professionals become better on-camera communicators. Karin notes that people often assume a stage presenter mode on video calls and come across as inappropriate or fake. She finds it gratifying to be able to help people navigate video conferencing during COVID using the skills she’s been teaching for 10 years.

Karin Reed was raised with love, hard work and positivity, which she infuses into her work as a communications coach today. Listen in on how this successful broadcast journalist went from shining on camera to training others on how to let their brilliance show on the screen.

Karin grew up in “a household with two parents who loved each other deeply” and attributes much of who she is to the stability in her upbringing. She gets her love of coaching, her people skills and her curiosity about others’ stories from her mother, who was a teacher.

Even though Karin’s father was a successful human resource professional, she remembers him having deep friendships with people of all ranks, including cleaners. From him, she learned how to treat everyone equally and take a genuine interest in their lives.

Karin got her first on-camera TV job with a CBS affiliate as a senior in college. She worked hard to learn the ropes and become a good reporter and was hired full-time when she graduated. She broadened her horizons working in a diverse workplace and learned to celebrate differences.

Growing up in a middle-class suburban household, Karin learned the value of hard work and education by observing her parents. Karin was a self-confessed daddy’s girl and was awed by the fact that he was a joyful person even though he had had a difficult childhood and never played the victim despite his circumstances. He used to say, “this experience has happened to me but it’s not going to hold me back.”

Being a female reporter has provided Karin with a unique set of opportunities. She was once asked to interview witnesses to a large fire along with one of her male colleagues and she wanted to speak to people about the impact of deaths on firefighters. When she compared her interviews with those of her male colleague, she found that hers were emotionally richer. She postulates that men don’t open up to men as easily as they do to women.

Karin married into a large Irish Catholic family, quite different from her quiet household of four. Her husband is one of the younger siblings of ten, and she observes that their communication patterns are not as deep as those she shares with her mother and sister. However, she takes joy in the large family and is happy that her children can experience both types of families, and learn to live in harmony with large groups.

Karin defines her temperament as that of “boundless optimism and also a lack of fear of being told no”. She dreamt of being either a broadway performer or a news anchor in 7th grade and persevered through wrong subject choices in college and her mother dismissing her chances to make her dream come true.

Karin says that she tenses up when planning for the future, but becoming pregnant after several failed attempts has taught her to appreciate the sublime gifts of life, and to let the joyful moments take the stress away. She has since rearranged her life to focus on her priorities and continues to maintain a good balance between her personal and professional life.

Karin is very self-aware about the fact that she does not experience different cultures in her daily life, and works to keep her knowledge updated. She is currently reading ‘The Black Friend: On Being a Better White Person’ by Frederick Joseph because she believes “it is really critical for everyone to be able to see beyond their own cultural prism.”

Karin likes working with people she enjoys who can enjoy her and have an “openness to try new things, a positive attitude, being nice, being encouraging”. She is also aware that the work she does requires courage of her clients and prioritizes creating a circle of trust in her coaching and training to help them feel comfortable turning vulnerability into an opportunity to grow. She loves making a difference in people’s lives and inspiring them to be self-expressed.

Karin says that ensuring you look good on a video call is not a matter of vanity but of respect for the person who is experiencing you only through the screen. Being mindful of non-verbal cues on the video helps in communicating more effectively.

If you are struggling with virtual presentations and meetings, check out Karin’s course on virtual video engagement training on her website. Be sure to read her books, the newest of which is a workbook and reference guide to strategically communicating through the rich medium of video conferences.

Karin Reed was a successful broadcast journalist before she transitioned to the corporate world, where she uses her training in on-camera presentation to help professionals become effective communicators and successfully lead virtual meetings in this new world order.

The Alchemy of Success with Perry Marshall

Why Not Now with Joseph Fung