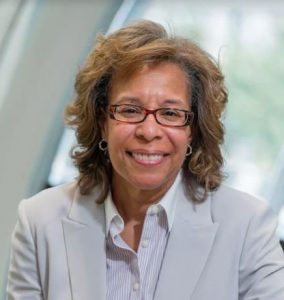 Dr. Wanda Costen is the Dean and professor at the School of Business at McEwan University in Edmonton, Alberta, who champions inclusive excellence. Leading with integrity, she eliminates barriers to sustainable change by reimaging how to prepare students for the 21st-century life of work and purpose.

Wanda Costen was raised in the military, across different continents, and went through 3 careers before finding her sweet spot. Listen in on how she uses her understanding of culture and academia to make a difference.

Wanda’s mother came from a working-class background, having worked in retail her whole life. A pragmatic and grounded woman, she ensured that Wanda and her brothers were prepared for the real world. She taught them the value of working hard and trying to be the best.

Wanda’s father served in the USA military, and the family moved every 3-5 years. This taught her and her brothers how to develop friendships quickly, adapt to one’s environment and view different cultures with openness. Wanda was 11 when she moved to Germany with her family, keen to learn the culture and language, and eat the local cuisine.

Still learning the ropes of living in a foreign country, she was befuddled when a young boy came up to her group of friends saying he would not play with her. Even though he apologized and became a friend later, this was her first experience of being viewed differently because she was African American.

Wanda was a part of the 7th batch of women in The United States Military Academy in West Point, New York. As an African American woman in an otherwise white male dominated world, she believes that these experiences helped shape who she is and what she does today.

Wanda identifies first as an African American then as a woman. She has navigated barriers of race and gender throughout her life and recognizes that its outcome is a constantly heightened sense of awareness. She was raised Catholic but left the church because of the lack of inclusivity.

She credits living in Germany for her directness, straightforwardness, and fortitude. She also imbibed punctuality, cleanliness, and the value of self-presentation from the Germans.

Wanda’s elementary teachers had identified early on that she was gregarious, outgoing and an extrovert. The people in her life find her caring and compassionate. She believes she is empathetic, transparent, and accountable.

Wanda struggled with having a “split personality” between her personal and professional life. She has worked hard to present her authentic self at work. She claims that her colleagues and students have now seen her exhibit a range of emotions.

She values the friendships in her life, but found it challenging to recreate a social group when she moved to Edmonton. She now has a group of women she feels very connected to and shares her feelings with.

Wanda had an “aha moment” as a military cadet. Since her family was in Germany, she went to her friend’s house for thanksgiving. She was taken aback by their grandiose, upper middle-class lifestyle, different from her humble upbringing. She realized that she would also grow up to have a life like this with the opportunities that a college education presented to her.

Wanda worked in 3 careers – sales, operations, and HR – and applied the skills and competencies she learned from each of them in her life. However, she left the corporate world at the prime of her career to heed her calling into teaching. She believes her openness to “explore and evaluate new and different ways” led her to Canada.

Being an American living in Canada, Wanda feels she is treated better as a visible minority here than at home; however, racism still exists in subtle ways. She says that her lived experiences and outcomes are different because of her background, and some Canadians struggle to acknowledge that.

Wanda needs people working with her to follow 4 tenets:

Her colleagues describe her as honest, fair, and transparent, and she values those qualities in others too. “If all my bosses were that way, sign me up!”, she laughs.

“Courage is one of those values that I hold really dear”, says Wanda. She believes that it takes a lot of courage to be a high-quality, effective leader.

Fluttering Around the Classroom: A educator teaches us how to bring our authentic selves into our daily lives through the awareness of its challenges.

Dr. Wanda Costen is the picture of courage and wisdom. She has transformed challenging life experiences into opportunities for growth by imagining herself in new and different circumstances. Her career trajectory is the result of mental toughness, adaptability, and willingness to collaborate even in challenging social contexts. Her awareness of ways to negotiate race, culture, language, and challenge has evolved and her resilience is buffered with groups of like-minded friends and constant reflection on her experiences. Articulate, social and ambitious, she is an example of how someone who strikes others as an ‘outlier’ can create her own family and community bonds, while forging ahead to new vistas of opportunity.

No Excuses with Victoria Pelletier