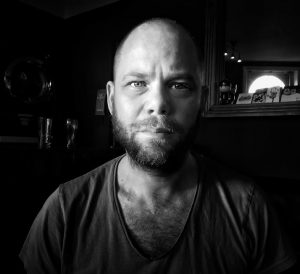 Stepping into my power: An English breathwork facilitator shows how following your heart can lead to finding your calling.

Benedict Beaumont is a Breathwork Facilitator, Yoga Teacher and founder of the Breathing Space School of Breathwork. He runs transformational workshops and life-changing retreats in the South of England, France and Canada. He also trains others who share his vision to do the same.

He believes that one of the magical qualities of breathwork is its ability to connect with our higher selves, with other people and with the environment. When we reach a deep level of connection, he claims, “harming the outside would be like harming ourselves”.

Benedict worked as a secondary school teacher for 15 years but quit to travel on a motorbike across India and Nepal, where he met his wife. They travelled together all over the world till he discovered breathwork and trained to be a facilitator. He now lives in Alberta, where he enjoys the mountains with his wife and daughter.

Benedict Beaumont grew up in a backwater town in England but caught the travel bug at an early age. Follow him as he recounts his travels across the world and the lessons he learned about finding his way home to his true self.

Benedict grew up in the 1970s in Brighton on the south coast of England. He would take road trips with his parents and sister through France, and listen to a tape of ‘My Family and Other Animals’ by Gerald Durrell on the way. Benedict was fascinated with life on the Greek island of Corfu in the 1930s as described in the book, and this “magical time of adventure and inspiration” developed into a lifelong love for travel.

At university, Benedict met a senior who, like him, played the guitar and sang songs and had been busking around Europe the previous summer. They then went together to Europe and had many adventures that enriched Benedict’s university experience. From earning 200 pounds busking to getting kicked out of a train in a snowstorm to hitchhiking with Dominican monks, he feels grateful now for the “excitement of being out on the road”.

Benedict was raised as a Quaker by his mother, and he would accompany her to silent gatherings. Even though he found it boring as a child, he now recognizes that it taught him stillness, respect and understanding, and made him aware of important issues in the world.

Living in France made him a foodie, and a self-proclaimed ‘cheesehead’. Travelling through Nepal developed in him a love for hiking through the mountains and awe for the natural environment. He claims that trekking in Sagarmatha National Park made him feel closer to God than he ever had before.

Benedict has always loved being around people and in communities. Even though he was afraid to take risks when he was younger, he grew to renounce the fear and reclaim his strength. When he started breathwork, he felt that he had found his sweet spot in life, and that was what he was meant to do.

Benedict learned his father’s way of showing affection, which was teasing. As Benedict grew up, however, he realized that teasing does not come across as affectionate to others and that others perceive such teasing as being hurtful. He then worked to change how he expressed love.

To work with Benedict, you must be honest, and willing to change and be vulnerable!

Benedict says that breathwork isn’t just an exercise to strengthen your spiritual system or physical well being. It can take you to a place of complete transformation, akin to therapy. It can be a substitute for meditation, an easy and accessible way for exponential spiritual development using just your breath.

Sign up for his courses and workshops to experience this transformation firsthand!

Benedict Beaumont has always valued his connections with people and being a part of communities. He infuses his work today as a breathwork facilitator with oneness to help each individual be the best version of themselves.

The Entrepreneurial Connection with Chris Thomson