Barriers to communication can be removed!

Ask employees in any workplace what the company’s biggest internal problem is and the majority  will say without hesitation, “communication,” (insert eye rolling and groans here). Why is it that although we are social beings and enjoy being around other humans, we just can’t seem to get  communication right?

Part of the problem is that often we are unsure about what barriers surround the communication context: what is it exactly that gets in the way of a message going from sender to receiver?  When it comes down to being specific about what should change to make workplace communication more effective, not many people are aware of the barriers let alone do they know how to name and remedy them.

But, I am getting ahead of myself.  It’s always better to start with a framework before trying to solve a complex issue, so let’s begin there with a few words about what communication actually is.

In true communication, there are actually three things that are happening between sender and receiver.  The people involved are:

As you can see, communication is not a one-way street. Unless a message has been received, processed and sent back to the sender in a way that both feel they have made a successful exchange, it is not true communication.

Getting in the way of communication

Because communication is a complex process that involves multiple channels and multiple individuals, each with their own ideas, histories, and expectations, it is easy for messages to morph (or even mutate) in the perceptions of communicators as information or ideas are shared.  Here are some of the most common workplace communication barriers[1]:

1. Physical barriers: These result from the nature of the environment.  Consider, for example, the natural barrier which exists if staff are located in different buildings or on different sites. Likewise, poor or outdated equipment, or failure to introduce new technology in a timely manner…these may also cause physical barriers. Further scenarios relating to physical barriers include the:

Each of these barriers has the potential to affect people’s morale and concentration, and this affect impacts how effective communication is in those physical environments.

2. System design: System design faults refer to problems with structures or systems. Examples might include an organizational structure that is unclear, a poorly-designed workflow, lack of standard operating procedure or an inadequate meeting structure.  On the other hand, overly complex touchpoints, sign-offs or dispute resolution processes can also create the kind of red tape that literally strangles communication. Consider also:

Each of these items can have immense impact on people’s attitudes and can act as a governance system that either supports effective communication or dismantles it.

3. Attitudinal barriers: These live within people’s minds and hearts. They can be caused by:

Often people with poor attitudes are tolerated, re-trained, moved to different departments or even promoted in an effort to avoid dealing directly with the person. The major difficulty in communicating with a person who has a poor attitude is that they tend to be closed receivers of information AND they are often closed senders of information.  When I say “closed” what I mean is that they have developed a rigidity in how they will communicate, what communications they will entertain, and often even who they will communicate with.  This inflexibility makes it difficult for them to share or receive anything outside their predisposed preferences, and that can be both intimidating and demotivating for others involved in the communication.

4. Individual language ability: The use of difficult, slang or inappropriate words in communication can prevent people from understanding the message. Poorly explained or misunderstood messages can also result in confusion. To speak clearly, the communicator must first think clearly and be able to focus on specific goals, then create the message that will reach those goals for the communicator AND the audience. This is a skill which requires practice.

Our personal psychologies tend to act as lenses through which everything we experience is perceived.  In terms of communication, if these lenses are spotty, smudged, or dirty, the messages we receive will be similarly affected.

7. Presentation of information: Simply put, the communicator must consider the audience before beginning a communication and purposefully build in elements that will aid understanding. Different audiences require different approaches to be receptive to communication, and these must be accommodated for in order for communication to be successful. 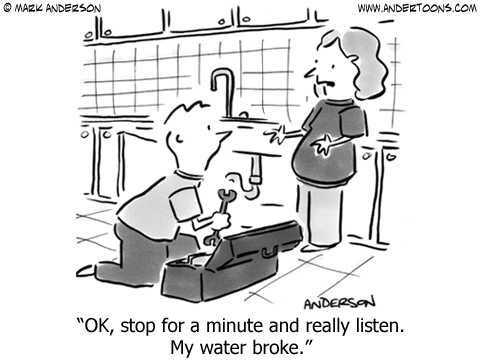 In summary, communication barriers can be related to the physical environment, poorly designed or functioning systems, attitudes, language ability, physiological difficulties or inappropriately or poorly presented information. These barriers are the result of many sources – cultural understandings, individual ability to process and retain information, etc. – and the barriers all result from one key place: we are all individuals with different abilities and experiences.  This fact is not going to go away.

So, how do we work with it?  We focus on what we can control: ourselves.  Our goal needs to be to remove our own barriers so that we ourselves are not an obstacle to others.

Watch the intro video to our Quickstudy Manager Program and start upskilling today.

There is this fantastic YouTube video about a communication problem between two people in a subway station. Although this is not a workplace specific example, it is easy to see from the situation how easily two people can jump to a negative conclusion instead of first finding out if there is a communication barrier that could be removed.

In the video a young woman wearing a veil tries to get the attention of another woman to ask her a question about which train to take to Happy Valley. It turns out the other woman is hearing impaired so their communication barriers are quite significant. You can watch the video below, and I will also show it to you play-by-play, identifying each barrier and then providing some advice on how to deal more effectively with this barrier should you face it yourself.

So here’s what happens in the video… 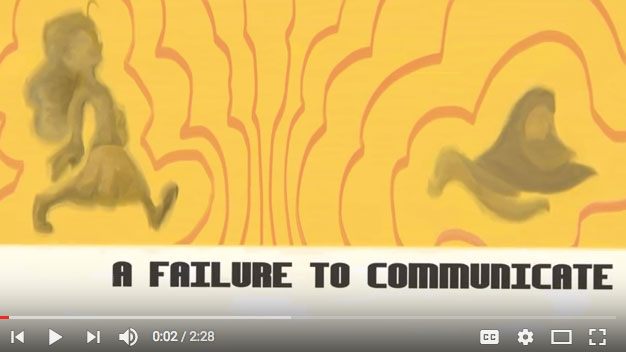 1. A young woman whose face is veiled (we’ll call her Woman #1) tries to talk to another young woman (Woman #2) at the subway ticket machine. Woman #1 is ignored by Woman #2 despite trying to get Woman #2’s attention. 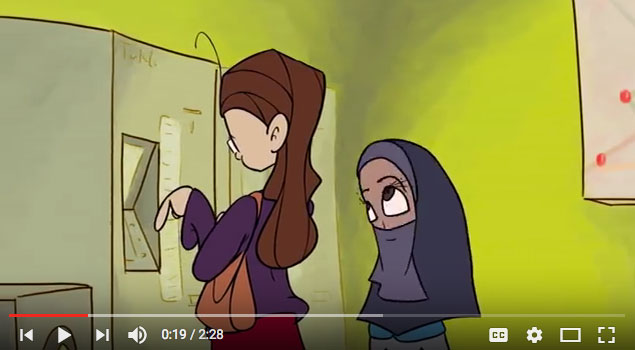 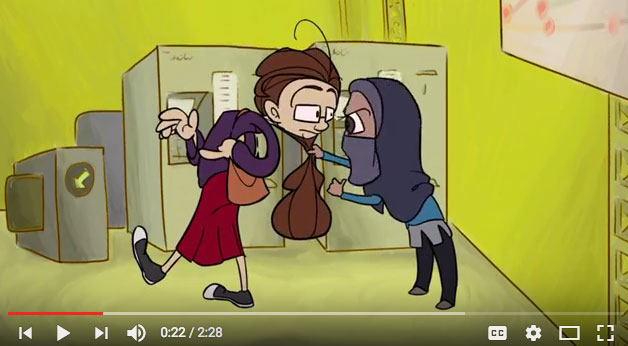 3. Woman #2 takes out a device that says, “Hello I am deaf, thank you for your consideration.”

4. Woman #2 types into the device, “Usually I read lips to understand people.” Woman #1 realizes that her veil is stopping Woman #2 from reading her lips. 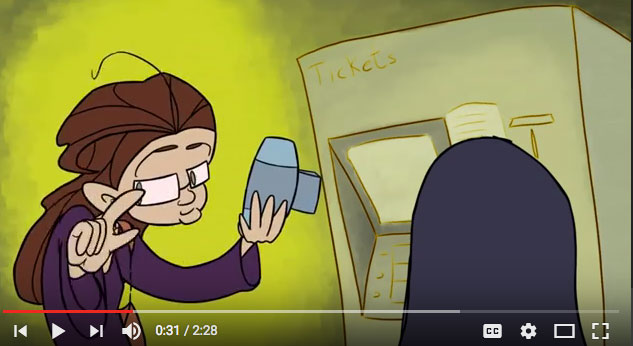 5. Woman #2 invites Woman #1 to type into the device so they can communicate. Just then the train passes by and the device only records a blurred sound.

6. They try again – but the device is out of power 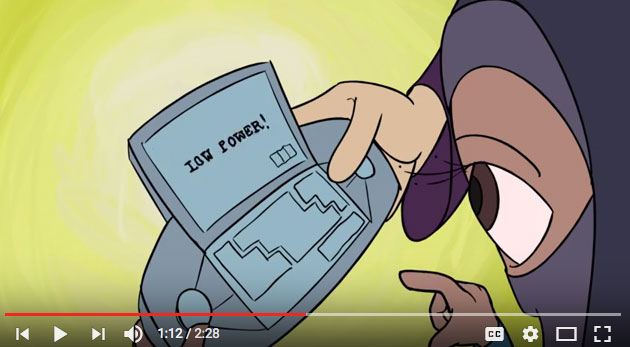 7. Woman #1 tries to show Woman #2 where she wants to go on the subway map, but Woman #1 is simply too short to reach it.

8. The two women use hand gestures to communicate, and Woman #1 is able to explain using gestures that she wants to go to Happy Valley. 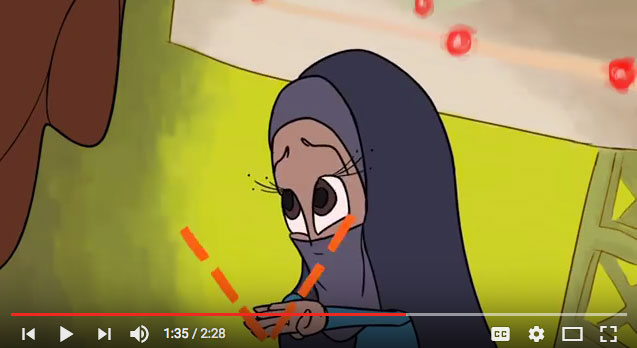 9. It turns out that both women are going to Happy Valley.  When Woman #2 shows her ticket, both women shake hands because they have just solved the problem. 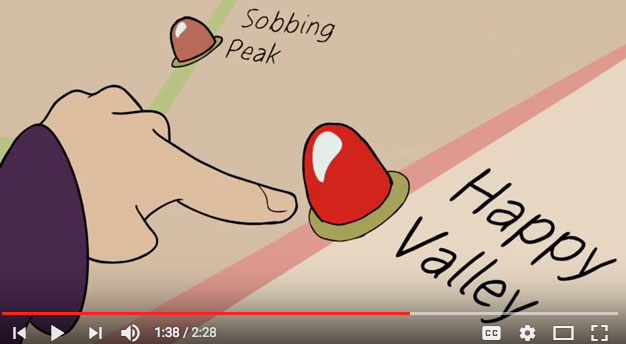 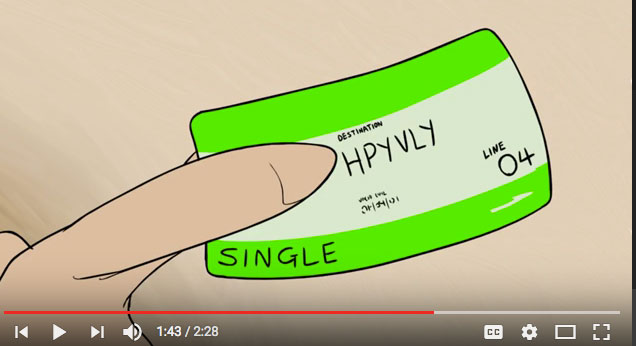 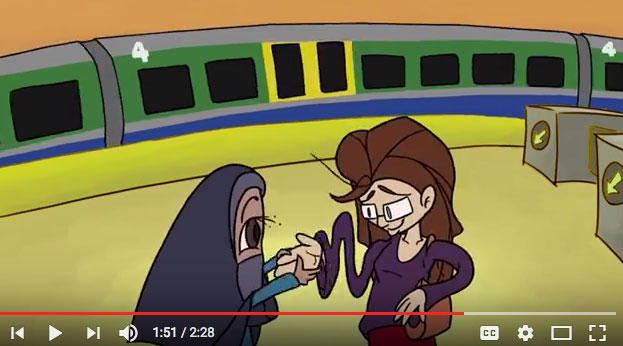 10.  Just then the train both women need to take leaves without them.

11. Woman #2 becomes frustrated and angry. Woman #1 feels bad about it.

12. As if to add more stress to the situation, an announcement on the subway speaker says, “Line four is delayed for one hour.” 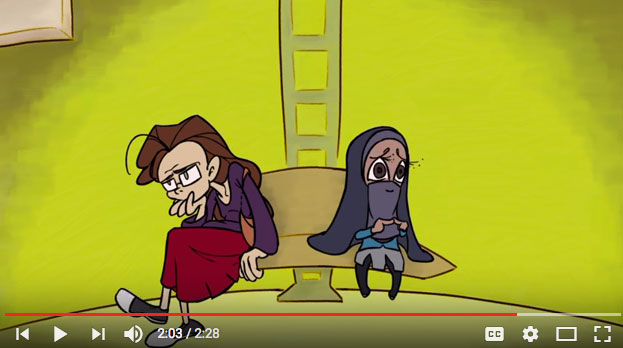 You’re smarter than you think!

Let’s recap. There are 7 barriers to communication; can you name them? See how many you remember before having to check back.

The animation we used shows how easy it is to fall into assumptions about other people’s motives and attitudes and underlines why it is important to remove the communication barrier to solve the problem.  What really works about the video, however, is that it also shows that even when barriers are removed, circumstances can cause us to have a negative attitude.

The lesson in this whole illustration is that me, myself, and I are ALWAYS the people who can make the most difference in establishing a climate of communication. The more we learn to suspend our own judgement and the more we look for collaborative solutions to problems, the closer we bring our workplaces to that ideal of free flowing and benevolent communication, and the more comfortable we will feel in our work environment.

Find this useful? Want to go farther?  Click below to check out our new Quickstudy Professional Package – designed for busy people who want to keep their skills current.

“Words are singularly the most powerful force available to humanity…Words have energy and power with the ability to help, to heal, to hurt, to harm, to humiliate, and to humble.”