“What? Are you trying to teach me something?” The link between organizational learning and polar bears

Let me tell you a tale of two species…

I was at a conference recently and one of the participants shared this story with me.

“So, I went to the CEO and I said, ‘We have to start learning to stay current in today’s economy.’ The CEO said, ‘Ya, why? I’m making money so why should I change anything?’ I said, ‘When sales go down and you see all the holes, it will be too late to fix things. It’s like trying to fix the hole in the roof during the rain. We should start now. Why don’t we look at some of the industry best practices and have brainstorming session?’ He said, ‘What? Are you trying to teach me something? Get out of my office.’”

Let’s label this story an example of species “I already know whatever matters, this is my empire, and nothing you say is worth listening to.”

Here’s another story. Entire species die if they can’t adapt to changes in the environment.

Polar bears need arctic ice to catch seals. Because of climate change the ice caps in the two poles are melting and seal populations are diminishing. The news has been full of dangerously skinny polar bears helplessly slipping off melting ice because they are unable to catch any seals. BUT all is not lost.

Polar bears, apparently, have decided not to wait for policy-makers to save their habitat and are engaging in new behaviours that have never before been observed in polar bears. They are eating dolphins – species of dolphins they have never eaten before – and burying parts of the dolphin in the ice to eat later. They are eating large amounts of snow geese eggs, seaweed and whale carcasses. And most incredibly, instead of hibernating in the summer, polar bears are coming on shore during the summer months and looking for food on land [1].

Consider the magnitude of these changes: behaviours that have characterized polar bears for probably thousands of years are changing in less than a decade. Polar bears as a group are undergoing a drastic culture change. Why? Because you have to learn to survive. And when you learn, you change. Sustained changes over time become changes to culture.

I’m calling this story an example of the species “We are going to figure this out together or die trying.”

This, my friends, is what business owners have to do to stay current and profitable in a volatile economy.

But maybe you aren’t yet convinced that YOU are the one who needs to do the learning. Yes, YOU – the CEO, COO, CFO, Operations Manager, Regional Director – a person of authority and influence in your organization. YOU have to be the one to make the first learning move, model it for the others, keep on doing it, and get those polar bear employees looking for dolphins, snow geese eggs and land animal food to keep the culture alive. Then you need to listen to what they learned and put it all together into a responsive business model.

Why organizations MUST learn to stay alive 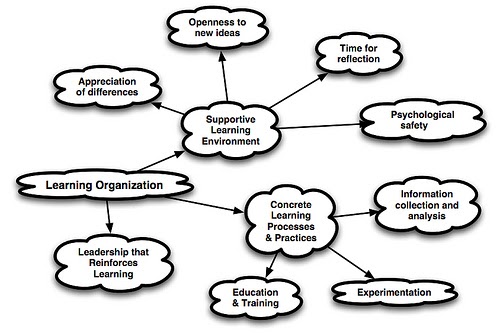 In 2007, David Herrera published a doctoral thesis that examines drivers of market share[2]. To summarize, Herrera studied a large sample of companies using the Nashville Market Share 2004-2006 index and found that Indie market shares started higher at 97%, while major labels and major Indie businesses were in the negatives (-7% and -30% respectively, and remained negative through to the end of year two). Interestingly, however, the Indie market companies took a dive from 97% to 19% in year one, and then went up to whopping 134% in year two.

After studying a number of variables, Herrera came up with the explanation that smaller organizations were hungrier to succeed and had greater fears that they would not survive than larger more established labels. As a consequence, like our polar bear friends, they began learning to adapt to the “new normal” environment. They were not successful in the first round because benefiting from mistakes takes learning, experimentation and reflection. But once the LEARNING began and they started to get the hang of things, they sky-rocketed up past all Major and Indie labels in terms of market share.

When diving deeper into the company behaviours that characterized the success, Herrera found several commonalities that were linked to increased market share. They were:

In brief, all three company categories (Major Label, Indie Label and Indie Market) were faced with the same unfavourable market environment, but only one, the category of learners (Indie Market), were able to make a profit and increase their market share, which is much harder to do.

This was troubling to our then-doctoral student.

“Not if my job is at risk!” – Barriers to organizational learning

After all, if people weren’t a factor, companies could easily implement these three factors into their organizations with a few “blue sky” meetings and a good project manager. However, there are a lot of reasons things are not that easy, a significant one being that fear is a strong motivator for people. Barriers to organizational learning come from individuals who, either from past experience or future prediction, perceive that disadvantages can be significant for those who step away from “tried and true” approaches. New methodologies inject levels of uncertainty into outcomes, and if outcomes are negative, it can affect who gets blamed for deficiencies and who gets laid off.

Herrera went on to examine in more detail some of the reasons larger companies have trouble becoming learning cultures, and he discovered these organizational learning barriers: 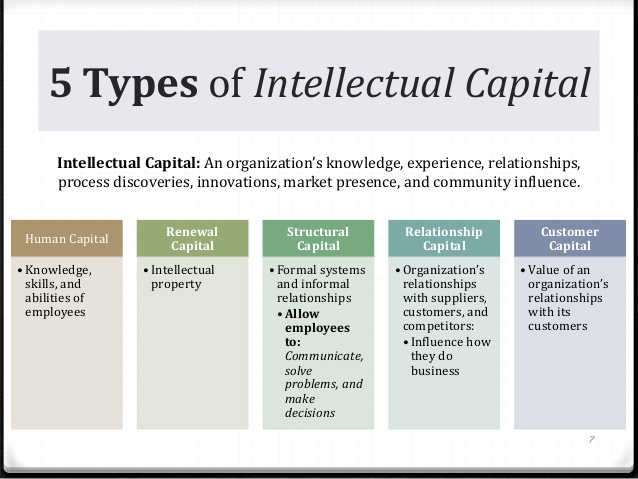 According to Herrera, knowledge constipation – the kind that comes from an individual’s inability to effectively access intellectual capital because the barriers to organization learning are firmly entrenched – leads to a general lack of adaptability towards new technology, unawareness of market trends, lack of ability to respond to market changes and a measureable tendency towards decline in sales year to year. In short, without the free flow of intellectual capital among organization employees, a company puts itself in the path of endangerment, if not extinction. 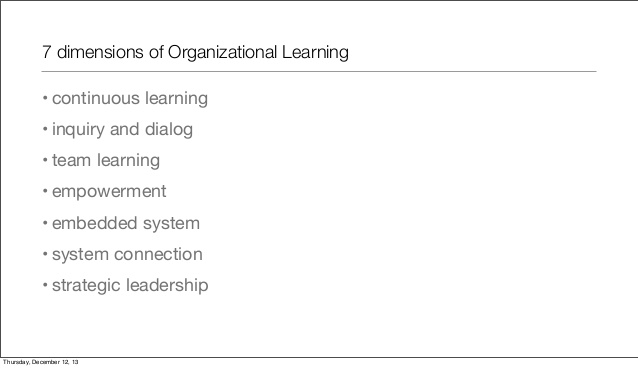 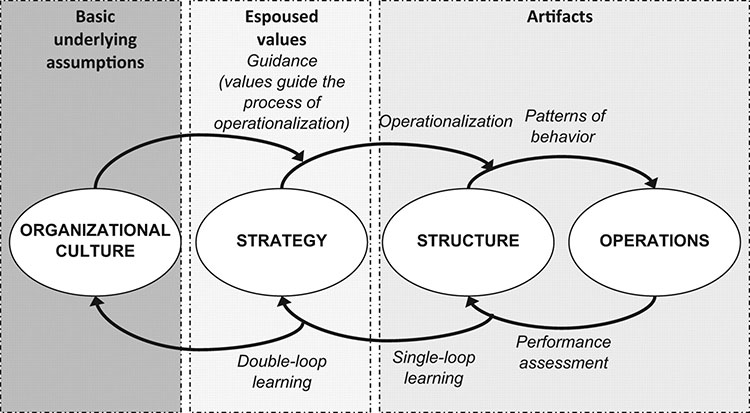 The Watkins and Marsik model is based on Peter Senge’s five learning organization themes [3]:

Senges has created a paradigm for considering what a learning organization needs to function effectively: 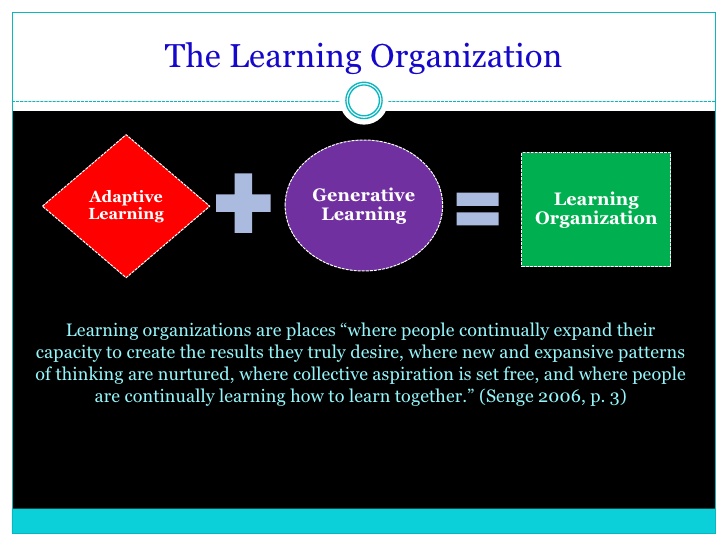 Using this understanding, let’s see how well the polar bears are applying these principles (of course this is my best guess…I’m no polar bear!):

From model to reality

So, you may be saying, “This all sounds great. We have those organizational barriers and the five dimensions of organizational learning make sense, but HOW do WE do it?” Here I invite you to look back to the polar bear example, see how to get started on this organizational learning journey, and commit to moving away from the “I already know everything there is to know” species toward the “We are going to figure this out or die trying” way of thinking.

The truth is that every organization’s situation is unique, and every plan will need to be different. Because it will be your team who is implementing the plan, use your team to build your strategy from the outset. In groups and over a period of time, start by asking yourselves how you can create the two climates and one system that David Herrara outlined for us earlier. Here they are again in question form:

How can our company foster:

It will take more than a “10 tips to more market share” article can cover, but the journey will be worth investing in. Don’t you think we should be able to do at least as well as the polar bears? Are you up for the challenge?

Talk to us about transforming your company into a learning, empowering system that can respond to market changes and increase market share: email marie@shiftworkplace.com.

Check out our Course Catalogue for online and blended courses for ongoing company learning.

What our customers are saying:

“Great overview, good material and great questions to reflect on. Provided an opportunity to gain more awareness, to step out of our comfort zone and to continue to be more mindful in our workplace…” – Anne Chandler, Accès emploi

“Shift has an incredible ability to assess requirements and are by far, the most exceptional training consultants that I have contracted during my tenure with Alberta Agriculture. Their work resulted in improved productivity in every plant where they provided services. Team building, conflict resolution cultural competency – they are experts in all aspects of these critically important facets of productivity.” – Karen Gingras, The Management Mentor, formerly Alberta Agriculture Retention Manager

[2] Herrera, David A. (2007). A Validation of the Learning Organization as a Driver of Performance Improvement, Doctoral Dissertation, Capella University. https://books.google.ca/books/about/A_Validation_of_the_Learning_Organizatio.html?id=Mrz_Dgolip0C&redir_esc=y