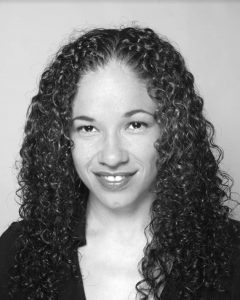 Kamal Sinclair is incubating collaboration among people who are imagining and prototyping bold ideas about the future. She does this as the Executive Director of the Guild of Future Architects, and supports independent artists as a Senior Consultant for Sundance Institute. Kamal makes art through a family creative practice called Sinclair Futures. Previously, she served as the Director of Sundance Institute’s New Frontier Labs Program, which supports artists working at the convergence of film, art, media and technology; and as an artist and producer on Question Bridge: Black Males.

Kamal is an artist first: she went to Tisch – Experimental Theatre Wing, was a cast member of Stomp (a popular off-broadway percussive symphony) for six years, and ran a theatre company in New York City in the 90s. At the beginning of her career, she became curious about the intersection of performing arts, entertainment and social justice. The disparity between the fiscal success of Stomp and the struggles of the community of artists in the city sparked her curiosity to bridge those gaps and become a steward of resources. She did this, not only to bring more sustainable careers to the community which she loved but also to help platform more diverse voices which were penetrating into more visible arts platforms.

After completing her MBA, Kamal joined the Woodruff Arts Center in Atlanta and worked on bridging the gap between digital arts and events at brick and mortar arts spaces. That’s when she began to discover the connections between trans media, culture making, storytelling and media making. Her friend from university, Hank Willis Thomas, was working on Question Bridge: Black Males at the time and she helped him turn what he thought would be a video installation or documentary into a trans media art project. After its roaring success at the Smithsonian African American museum and Sundance, she became a trans media artist and producer.

She was invited by Sundance Institute to run the New Frontier Lab program for 7 years, giving her access to an incredible community of innovators at the intersection of art, science and technology. During her time there, she discovered the problems around fair distribution of resources to artists, which led her to starting a research project called Making A New Reality, looking at furthering equality in emerging media, democratizing the imagination of the future and defining how exponential technologies for culture and society making should be used.

At Woodruff Arts Center, Kamal worked as a consultant in the strategic development deparment and her task was to increase patronage and visitorship from younger audiences, and to create a space for a wide range of creative expression. The predominant subscriber base and visitorship (aging patronage) was not truly representative of the diverse city of Atlanta. She worked on creating different kinds of programming for people to feel drawn to the arts center. As she researched how to build audiences in this digital age, she found brick and mortar spaces transitioning into online spaces through virtual museums and other technology. She discovered interactive media through her research with the National Film Board of Canada. She also unearthed discussions around the democratization of the arts, with debates emerging around the need of an MFA degree to be called an artist.

She’s currently working on trying to democratize the imagination of our future through creative production and working with communities to combine different fields of study into a more inclusive, intersectional space.

Born into the arts, Kamal Sinclair has a goal to create a more equitable and enriched future. She does so by exploring the confluence of arts, science and technology to come up with ideas to make the world a better place. Listen in to discover her illustrious journey.

At the age of 12, Kamal was spotted at a Los Angeles theatre group performance and recommended to an Australian theatre group called WildFire Theatre Group who were on a South Asian tour. A dancer had dropped out, and Kamal fit the bill for the person they were looking for. So she took a semester off her 8th grade and went to Hong Kong, Thailand, Macau and China and then over to New Zealand to work with another youth group called Youth For One World who toured the north islands of New Zealand for two months. She says she was changed by the “real sense of what it means to engage with a global community of artists.”

She had a transformational moment on a rice field in China, thinking back to the violence on her campus back in Los Angeles. She found it futile that there were wars taking place on small matters when “there’s a whole world out here.” She thought if the 500 kids who went to her school stood on that rice field in China, they would see how ridiculous fighting was.

Kamal comes from an arts family. Her father was a musician and used to manage bands. Her uncle was with the Olympics in the 50s and 60s and a big garage band which featured on Top 40 charts. Her uncle was a theatre maker and had created a couple of well-received plays in New York and LA. Her older brother and sister were members of the Baha’i Youth Workshop, and she followed them on short term tours on her summer breaks. As she puts it, “We had already a great investment in the arts in my family.”

Kamal has her first brush with arts leadership at the age of 9 in a youth theatre arts group. Because she had had training as a dancer and theatre maker, she was given the responsibility of art making, choreography, direction and the administrative work of organizing the tours. She went to a high school for the arts in LA, which gave her her first opportunity to create a play from scratch.

When she was entering into the community of resource stewards, she was afraid of the responsibility and the ways in which power would impact her ego. She thought about the other stewards and how she could emulate them. However, knowing the struggles of being an artist, she had a 9-month period where her ego was tested by the “seduction of privilege”. She began to rationalize certain decisions she made which were ethically questionable because she began to adopt resource management strategies which were more self-serving.

When she converses with communities, she tries not to approach it as an ’us and them’ philosophy, but uses design principles to imagine a future with shared prosperity. One of the principles is divine justice. “Designing for justice,” she says, “over this next century, that is the base line… That should be given.”

When Kamal was working at the Woodruff Arts Center, she found it challenging to convince people of the need for the arts – creating a sense of purpose, well-being, empathy and mental health. In her words, “Trying to communicate why STEAM, not STEM is a challenge.”

At the New Frontiers Lab, she found stalwarts from different fields feeling intimidated by each other’s work. However, they also understood the importance of interdisciplinary creation. She observed that one can “bridge… what seems like two totally different languages, alien languages, and say, ‘Oh, we’re actually… doing the same thing. It’s creative work, and we can find ways to bridge those gaps.’”

Kamal once heard a story of gender equality told through the voice of a western feminist woman instead of the woman narrating it. In that woman’s culture, they didn’t face the same western patriarchal issues as Americans did but they assumed that that’s what the Americans needed to hear to give them access to resources. That’s when Kamal understood the legacy of inequity in relationships that colonialism left behind, and the blindness of privilege.

Kamal believes that artist residencies should be more inclusive, with intellectual and creative collaboration and consultation.

Kamal says that creating a process to mitigate one’s own blindspots in organizational leadership is not easy. She has her own challenges with creating an inclusive way of designing collaboratively and accepting feedback. She learnt from NASA’s Columbia space shuttle tragedy that a hierarchical structure ignores important opinions in decision making. That is why she recommends adopting a design for the margins first. Using universal design practice, creating solutions for the marginalized may lead to benefits for everyone, not just the marginalized.

Democratizing the Future: An artist-steward explores how arts and social justice can blend to make the world a better place.

Imagining bold ideas for the future – That is the purpose that drives Kamal Sinclair’s leadership and sense of community. Growing up in an arts family in Hollywood, she was soon recognized as having outstanding dancing and acting ability, but she did not stop there. From the age of 9, Kamal has been a pioneer in the arts, business and technology when she was first recruited to dance in an international dance workshop which performed around the world. As an adult, combining the ability to create art for social justice, dance and create film at an internationally recognized level of excellence, set budgets and organize workflows would already be enough of a skillset. Yet Kamal has another critical ability. She can translate the processes of AI technology to artists, and artistic experience to software creators so they can better collaborate. Her goal is to build open spaces for people of all backgrounds and economic levels to speak their truth through the arts.

How To Do Good with Andy Knight