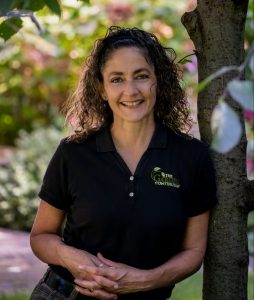 A positive disruptor to conventional methods: An Armenian-American landscape professional shows us how to embrace our differences and carve our own niche in the world.

She is the founder of the Life-Scape Method for landscape development and the author of the book ‘STOP Landscaping, START Life-Scaping’ which outlines how to imagine and plan a regenerative landscape.

Monique considers her primary job ‘A Gardener of People’ and is committed to nurturing a compassionate business culture that supports her mission to be an eco-friendly company with triple bottom line success.

She is an active business coach in the green industry space, specializing in working with business owners to grow their landscape business practices through the development of scalable systems and well-curated and nurtured teams.

As a bilingual Armenian-American, Monique Allen had a plethora of cultural influences in her childhood. Listen in on how she combined the many identities she holds to establish her own workplace culture in the landscaping industry.

As a child, Monique visited her maternal grandparents in the Allegheny Mountains in Maryland. She would ride in tractors and be happy even without running water or electricity. That was when she felt a “cellular connection” to nature.

Monique’s mother ran away from Maryland to Europe, where she met Monique’s father, an Armenian who had escaped to Syria. Her desire to nurture the planet comes from feeling unsafe with “eccentric, runaway” parents who weren’t willing to parent her.

Monique grew up with a “3rd culture mindset”, living in Paris and then in an Armenian community in the United States, studying in a bilingual school, speaking both French and English at home with a dash of Armenian.

Even though Armenian cuisine is her comfort food, Monique has always felt like an “outsider Armenian”, because she isn’t as fluent in the language. She seeks out strays in social groups or those who belong to other groups too, craving diversity in the company she keeps.

Monique had attended 12-13 schools by the time she started high school. She was so used to moving that she was afraid to settle down. However, she finds that she has understood herself better being in a marriage in one location for 24 years.

Even though her mother was Catholic and her father Orthodox Christian, she was not raised with religion. Her Christian friend and her family took Monique under their wing, and she immersed herself in the religion. As a yoga student, she has a broader understanding of spirituality and energy.

Monique finds that her life has been about connecting the dots and turning “your attention to the broader ecosystem of your surroundings”. A troubled family with tri-cultural influences, the constant moving and the introduction of a little sibling at age 5 made her make connections for survival.

Monique claims she was an easy child and her parents treated her as an adult, asking her to care for her little brother when he was born. She also has a naturally positive mood and outlook, with her motto being “the glass is full, it’s not half empty or half full”.

However, she can also be serious and demanding of herself and other people, which she attributes to her “abrasive upbringing”. She has had to unlearn any destructive behaviours from the past and reconnect to her easy temperament.

Monique once had an employee who had the vision, skills and abilities for the job, but she couldn’t find a cultural common ground with her. When another employee said she may not be a cultural fit, Monique began learning about culture in the workplace and how that fits in with her company.

Monique now establishes her mission, vision and values, and only works with those who resonate with them and can do so in the long term. She now looks for people who are resilient with diversity and are weird, “with the definition of weird being the creative brilliance that is you”.

She is a stickler for organization, clear communication and data – “Vagaries make me crazy”, she quips. However, she does not believe in micromanaging and even works in a separate space from her employees, so they are able to be autonomous in a “trust culture”.

One of the employment deal-breakers for her is someone who is a heavy smoker and smells of nicotine. She has established a wellness-focussed environment where smoking is prohibited, and the state of Massachusetts’ laws align with the company policies.

Visit Monique’s website to buy her book, Stop Landscaping, Start Lifescaping, read her blog and access many resources to get started in this field. If you are a green industry professional, reach out to her for business coaching to scale your company to the next level.

Monique Allen’s story is one of overcoming the difficulties of her upbringing and reconnecting with the earth as her parent. In this episode, she shares the diverse cultural influences that make her who she is, and the cultural preferences she has fortified her successful landscaping company with.

Sink or Swim with Raphael Adegboye

Say What's On Your Mind with Chris Marhefka