E14 From Candy to Coaching with Karla Briones 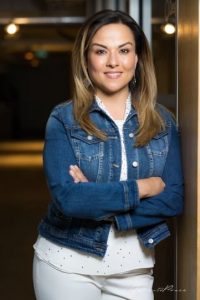 Karla Briones is a Mexican-Canadian serial entrepreneur with a passion to helping others succeed in their business journey. She uses her 10-year business experience to mentor, coach and help new immigrants become successful entrepreneurs in their adopted country. She is part of the team of independent business advisors at Invest Ottawa, providing strategy services to local aspiring and current entrepreneurs.

A year and a half ago, she helped her father sell his business. He had made many mistakes in setting up his business which made him lose a lot of money and put his retirement in jeopardy. When she saw her dad’s disappointed face, she thought, “I need to use the knowledge that I have and the networks that I have to help the next wave so that I don’t see that face again on somebody else’s dad.” This is the ethic which guides her work today.

In 2018, the City of Ottawa recognized her contributions in the local economy and entrepreneurship ecosystem with the Newcomer Entrepreneur of the Year award. She actively gives back to the community and volunteers as a mentor with Futurpreneur Canada, WorldSkills and other local community groups.

As a Mexican-Canadian, Karla Briones has the best of both worlds – a firecracker personality and the opportunities to share her successes. Tune into this podcast to learn how she imparts her entrepreneurial know-how to create a space for every individual to succeed.

Karla had a modest upbringing in the north of Mexico, a part that bordered Texas. Her mother was a teacher and her father owned a successful veterinarian franchise business.

When she was 6 years old, her father asked her to arrange for her own money if she wanted to buy any toys on a trip the family was taking to Disney in California. He told her that he’d lend her some money interest-free with which she had to buy and resell candy to the neighbourhood kids. After her first experience handling money was successful and she paid her father back, she began investing her profits back into her business and sold candy to her school friends too.

She became so successful that the school cafeteria candy sales began dropping and her school principal called her parents demanding that she shut down her operations! This experience taught her, “It doesn’t matter how old you are. If there’s a will, there’s a way, especially if it has Mickey Mouse at the end!” She became resourceful, confident and a go-getter and began thinking outside the box. She started many other businesses after that.

At 18, when she finished high school, her parents moved the family to Canada for safety and better opportunities. Her parents had to begin from scratch with odd jobs while she attended university. She struggled to balance the new liberal world with the sheltered, Mexican life at home. Although she renounced her conservative religious background on moving here, she found that her inbuilt moral compass helped her guide her decisions as an adult.

Karla was born into an extremely goal-oriented environment. Even though the area she grew up in expected women to lead sheltered lives, her mother presented a different reality to her – she worked, contributed equally to the family’s finances and always taught her to do anything she set her mind to. She has even taught the same to her 2 daughters, aged 11 and 7, who now run their own business – Spoon Lickers Vegan Bakery. She teaches them to be independent and save for their needs.

5 years ago, Karla was going through a burnout when she realized that her body craved movement, since she used to be a semi-professional ballet dancer since the age of 3 in Mexico. She began yoga as a way to move her body but it also became a spiritual solace. The yoga community she is part of is nurturing, uplifting, understanding, and empathetic and they are tied by their love for yoga.

She also belongs to entrepreneurship organizations – EO and Tech Canada – where likeminded business people share best practices and ideas in a peer to peer learning environment. They have been paramount for her development as a business person and human being. Sharing both personal and professional successes and setbacks has been cathartic and has allowed her to be comfortable with her vulnerability. She says, “Belonging to a group of not only powerful business people but powerful and vulnerable business people has been… amazing.”

Karla says, “Everything I do, I do it with passion.” Over the years, she has learned to back up that passion with strategy to sustain it.

Karla wears her passion and enthusiasm on her sleeve. When people share their business ideas with her, she becomes so engaged that she may interrupt them mid-sentence to share what’s racing through her mind. However, since she has been made aware that such behaviour is considered rude, she has been working to rein her excitement in a little. Being married to an eloquent Canadian who weighs his words gives her this practice daily!

Karla is very generous in sharing her experiences and contacts to help her clients succeed, even if that is beyond the scope of her services. She also believes in the power of vulnerability and works to unearth the inner workings of anyone she’s coaching or consulting for. She uses body language cues and explores themes which come up through those. She recommends anyone working with her to be open to this approach.

Karla summarizes her advice to all immigrant entrepreneurs as, “Never give up on your dream and always be very proud of where you’re coming from.” She encourages owning one’s heritage and experience from back home.

Most of her clients are newcomers from developing countries, who cannot fathom the amount of help available from the Canadian government. She says working through that unfamiliarity and discomfort is one of the first things to be done as an immigrant entrepreneur.

She is soon going to sell online courses for immigrant entrepreneurs. Check out her website to learn more: www.karlabriones.com.

Back your passion with strategy: A Mexican-Canadian serial entrepreneur shows how to channel your life’s emotions into a successful business.

Karla Briones infuses her coaching and consultation with her joie de vivre to help others develop and sustain successful businesses. In this episode, she shares how her life experiences shaped her professional persona today.

Finding the Balance with Harold Kurlander