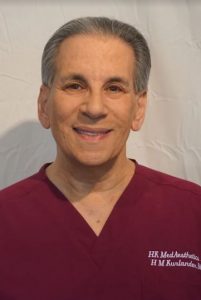 Hal Kurlander grew up on Long Island, New York, attended the University of Pennsylvania (1969-1973), and received a B.A. in psychology. He then went on to medical school at Baylor College of Medicine, Houston, Texas (1974-1977), receiving an M.D. degree followed by internship in internal medicine and residency in neurology at Baylor-affiliated hospitals in the Texas Medical Center (1978-1982).

He then joined a group practice in neurology from 1982 to 1990, followed by 17 years of solo private practice in neurology with specialization in movement disorders (1990-2007), and the next 10 years (2007-2017) pursuing the same areas of study as senior partner with another group practice. After 35 years of clinical neurology, he is now semi-retired and works in the area of facial aesthetics (Botox and dermal fillers) at regional medical spas and clinics.

As a movement disorder specialist, the most effective treatment for facial spasms and spasticity he used was Botox injected in specific muscles in high doses. Hence, it was an easy transition from his previous work to cosmetic Botox injections. He also added dermal fillers to expand his cosmetic practice. This unique career transition gives him the best of both worlds – improved quality of life from working with clients instead of ailing patients and the strong foundation of experience which gives him an edge over others doing this work.

Hal Kurlander went from being a shy child to an outspoken university rebel to a neurologist to a facial aesthetician. Tune into this podcast to learn about his illustrious journey.

Hal grew up in a half Jewish and half Italian-Catholic community with shared values of belief in family, honour code, work ethic, and self-actualization. With many families established by conservative first or second-generation immigrants, he learned how to be himself with the people “on their territory and their terms.” Their shared love for food and children made it easier for him to find his place in that community.

His interactions with other children at summer camp helped him climb out of his shell and overcome his fear of standing out. He learnt how to find himself around people who were from different communities, and accommodate their different perspectives. He began to take leadership in aspects he had knowledge of, which developed his confidence in his abilities and made him want to do more.

Hal was most influenced by his immediate family, and has emulated his parents’ work ethic and parenting style. His father always worked 2 to 3 jobs and his mother was a professional artist who held art classes at home 5 days a week. He never felt they lacked anything growing up, because his parents worked silently to always have food on the table, a house and a car. As a 2nd generation immigrant whose grandparents were raised all over Europe, Hal remarks, “That work ethic was just a dominant force in my thinking.”

While his personality shone through his interactions with children at summer camp, fighting back unchecked bullies in school made him more action-oriented and rebellious. In college, he embraced the 60s wave of rebellion and crossed administrators with his choices. As an honour student, he was excused for some actions, but when rebellion became a norm, he had to decide if he wanted to be different or find a community of peers whom he could share similar life experiences with. At university, he had to come to terms with the diversity of his classmates as well as the humbling realization that some of them were smarter than him.

In college, he was the local student leader of the nationwide university strike to protest the happenings in Cambodia in 1997 during the Vietnam War. During the summers, he worked for a county road crew and a mail carrier, both the most conservative organizations. Living in the two worlds, he became less polarizing as he grew older, which became essential to his job as a physician to earn his patient’s trust.

As a child, Hal was very outgoing. His life was very easy, and that ease reflected in his personality. When he first started making contact with people who disagreed with him, his response was to back away because he wanted to avoid conflict. Now, he considers himself easygoing and patient. He finds that it is much easier to get people to work with him and follow his suggestions if he is easy to talk to.

Hal has experienced significant changes each time he has moved. People think and behave differently everywhere, from Long Island to Pennsylvania to Texas. He says, “Dealing with people who are brought up completely differently from the way you were brought up was… and still is sometimes, a shock.”

Hal says that open communication is the best way to work with him. He wants to listen to what others have to say and he wants to be heard. He suggests listening to others, evaluating what they said and then incorporating their views into our own. “When talking to others… keep it simple,” he recommends. In his opinion, using big words doesn’t show how intelligent you are, it drives people into a shell. That’s how he has always tried to work with people even though sometimes one needs technical language for description in medicine.

Hal has been moulded by all his experiences with people, especially the thousands of patients he has helped. He notes that doctors today don’t garner the same respect and control they once did. However, within the medical community, doctors still rule the roost. Sometimes, he has to encourage his employees to actively argue with him if they think he is wrong. His advice to any employee would be to listen to everyone’s ideas and to practise their communication skills.

Sign up for his course at www.socialconfidencemastery.com and watch your personal and professional life transform!

Learn to listen: A semi-retired neurologist-turned-facial-aesthetics specialist shows how good communication is the key to a full life.

Learning to deal with other people and taking the middle road is how Dr. Hal Kurlander characterizes his life as a neurologist and most recently as a facial aesthetics specialist. He talks about his life growing up initially sheltered within two cultural communities – Jewish immigrants and Italian Catholic immigrants and then moving into an experience of opening to the world and the diversity of his patients.

Hal Kurlander’s values of truthfulness and trustworthiness come through his life story from the time he was very young and continue to the present. The experience of constantly negotiating his two conflicting tendencies to alternately avoid conflict and face it head on, helped him realize how important it was to consider the context, the people he was in conversation with, and the goal of having both sides work together for the best healing environment.

During the interview, he speaks openly about the difficulty of getting others, particularly staff, to speak honestly and frankly to a doctor, who is consistently held in esteem and authority. He also speaks to the feeling of losing status in society, when one is used to people automatically giving extra space to approaching doctors in hospital hallways.

From Candy to Coaching with Karla Briones