E12 It’s All About Relationships with Lewis Cardinal 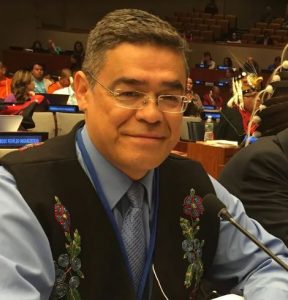 Lewis Cardinal comes from the Woodland Cree First Nation in Northern Alberta. He is a communicator and educator who has dedicated his life’s work to creating and maintaining connections and developing relationships which cross cultural divides. A lot of his work has taken him into inter-government and inter-faith work as well as community development. His long track record of public service includes Founding Board Member of Alberta Aboriginal Arts, Board Member of Theatre Network, Co-Chair of the Aboriginal Commission for Human Rights and Justice, and Trustee of the Council for a Parliament of World Religions, just to mention a few.

Lewis has received Queen Elizabeth II’s Diamond Jubilee Medal for Public Service, the IndSpire Award for Public Service (the highest award given to an Indigenous person by Indigenous people in Canada), the Province of Alberta’s Centennial Medal for his work in Human Rights and Diversity, the Distinguished Alumni Award from Grant MacEwan University, and he was recently conferred the Honorary Degree of ‘Doctor of Sacred Letters’ from St. Stephen’s College at the University of Alberta.

Lewis Cardinal, a Woodland Cree First Nation native, has based his career on answering the question, ‘How do we develop relationships?’ Listen to this podcast to unearth insights on building bridges between different worlds.

Lewis’ earliest memories are with his grandfather, who was the Chief and one of the founders of the Indian Association of Alberta, a large political organization in the 60s. Working and living with him from time to time, Lewis was struck by his deep, authentic, and sincere commitment to the people. He taught him a profound lesson: “When you become successful, you have to turn and help those up and give them a hand up because there are some people who are not as lucky or fortunate as you and so you have an obligation to help those people up, to look after those people.”

His grandmother, too, reinforced a strong sense of giving back to and looking after the welfare of the community. She had a large garden which he helped tend. She always grew things for the community too, and she made sure she had some to give out.

A period which had a huge impact on his life was growing up during the turbulent Red Power Days, the Indigenous movement from 1968 to 1974. In 1968, Trudeau decided that he was going to eradicate indigenous rights and reservations, in a doctrine called the White Paper. Lewis’ uncle, one of the most recognized indigenous leaders of the 20th century, with Lewis’ father as his Vice President, along with the Chiefs and elders of Alberta, countered this with the Red Paper, which was formally known as Citizens Plus. Media and public support for it forced the government to retreat the White Paper and to adopt Citizens Plus as the framework of indigenous relations. This work led to the 1982 repatriation of the constitution which included the Protection of Indigenous Rights in Section 35 of the Constitution. Living through this pivotal historical moment influenced him in the work he does till today.

Lewis’ has a strong and prestigious Metis lineage from his grandmother. The Metis had been the conduits between the First Nations and Europeans, and that ethic shaped his life view. The Metis culture also taught him hard work, determination, tenacity and to never give up – that if you put enough work and thought behind things, you can move them forward.

The Woodland Cree side of his family includes the people who first made Treaty No. 8, and two signatories of Treaty No.6. This responsibility has taught him that all Canadians have obligations to each other. The treaties were not only adoption ceremonies of the settlers into the native families, but also important ways to avoid conflict. Lewis observes, “A golden rule within indigenous worldview is that you do not make war on your family.”

Though Northern Alberta is his ancestral home, he has lived in Edmonton since the age of 10, a place which gives him lots of energy and connection because many of his relatives had ancient ties in Edmonton. As a practitioner of Cree traditions, he is a sun dancer and pipe carrier.

Working in education and with the interfaith community made him aware of commonalities between indigenous people and those from spiritual traditions, giving him more support and insight to be a better person. He says that the more he understands spiritual religions, the more he is able to be respectful of them and the people who follow them.

He finds threads of indigeneity woven into his political identity as a social democrat – looking after people, seeking social justice, and making sure everyone has enough. Working in the federal party has taught him a lot about party politics in Canada. He has also paved the way for more indigenous people to enter politics by being the first indigenous person to have run for city council in 2007.

Lewis claims that he has always been a diplomat and peace-maker. Staying at his grandparents with his extended family quite often as a child, he learned to resolve conflicts that came up during playtime. People in his life know him as kind and easy-going. Although the society views those traits as weaknesses, his tradition sees them as strengths.

Growing up, he learned that the world is filled with naysayers, or noisy negativists, as he likes to call them. He faced them when he was developing the Edmonton Aboriginal Accord Relationship Agreement, the first time the entire indigenous community agreed on some important issues. However, he charged through their lack of faith with perseverance, consistency and clarity of vision, and heart-work.

Lewis had always been told by authorities that he was different and didn’t fit in. In Grade 4, when his family had newly moved to Edmonton, he realized that he was on the outside looking in. During a schoolyard game, his classmates were deciding who the toughest child was, and Lewis wanted to participate. However, they told him he didn’t count. Even now, when he is told that his way of doing things is different from what others do, he has to take a step back and change his strategy to move ahead.

Lewis advises employers to actively listen by paraphrasing and be present in conversations. He remarks, “We all know that 70% or more of communication is non-verbal. That means our subconscious is picking up a lot of body action and subtext.”

He also asks that employers keep their assumptions in check. No two people see the world in the same way, and thus indigenous cultures can seem to challenge personal and cultural worldviews. We must become aware of our own world view in order to overcome any conflict or ethno-stress.

Lewis recommends reaching out to someone from the indigenous community to guide you, answer your questions and teach you more about indigenous traditions and knowledge. They will help you follow the respectful process and protocol to access the wealth of information available.

He serves as the Senior Strategic Advisor to an organization his children have founded, Naheyawin, which connects companies, governments and NGOs to the indigenous community to fulfill their obligations as Treaty people and help everyone “remember that we’re all related.” His role modelled after an indigenous elder, who provides guidance and knowledge. However, it is the leaders who make the decisions so they can gain wisdom from the consequences and pass on those lessons to future generations.

Naheyawin’s play won a Sterling Award for Outstanding New Play in Edmonton. Visit www.naheyawin.ca to learn more about their work.

The One Who Comes From The Clear Blue Sky: A Woodland Cree First Nations native shares his journey of becoming a relationship builder.

Walk side by side until you have built bridges of understanding. That is the relational approach informing all of Lewis Cardinal’s work as he acts to inspire a more just and equitable society. Through the power of indigenous teachings, the value of treaty, story and education, Lewis reminds individuals, communities, government, industry and institutions that we have obligations to each other that must be honoured to inform the legacy we have borrowed from our grandchildren. His explanations and metaphors are helpful in understanding other people and our place and purpose in the world, especially the analogy of baseball as a way to understand non-linear time.

Within, Between, Among – The Interaction Between Stories with Ron Carucci