We start with a story…

There was a young man driving his car home on the expressway one evening, when he heard a loud bang and felt his left rear tire blow out. He pulled the car over on the shoulder of the expressway, got out, and saw that he had a flat tire. Even worse, he had forgotten his cell phone at home and now had no way to contact a towing company.

Frustrated, he went into the trunk of his vehicle and pulled out the spare tire and a jack. It was getting close to evening and the sun was setting. He noticed cars were whizzing by just a few feet away from the tire he was about to change and so he decided to put on his headlights to make his vehicle as visible as possible.

As luck would have it, the tire that he was attempting to change had not been rotated for at least a couple of years. The lug nuts were rusted onto the wheel bolts and it took a lot of muscle and time to finally get that tire changed. Ready to get back onto the road, he jumped into the drivers’ seat, turned the key in the ignition, and – you guessed it – he had a dead battery.

Now frustrated AND discouraged, our driver got out of the car and started waving a white flag: he knew he needed help to resolve this. Before he knew it, a little old lady pulled up behind his car. Relief! He went over to share about his situation, finishing with a request: “Do you have a pair of jumper cables?” No. She didn’t. And it was then that the young man thought of an idea…

Since he had a manual transmission, he knew that if he could get his car up to 25 miles per hour he could pop the clutch and start the car manually. All he needed to do was to convince the woman to give him a push with her car.

He explained that since the back bumper of his car was about the same height as the old woman’s front bumper, all she had to do was push his car with hers to “get him up to 25 miles per hour” and he could start his car. She looked a little confused, so he explained it to her again. Finally she seemed to understand, and with that the young man got back into his car, put it into neutral and waited for the old woman to give him “a push.”

This story is a good illustration of what can happen when we don’t take the time to clearly communicate our ideas to other people.

The issue of communication 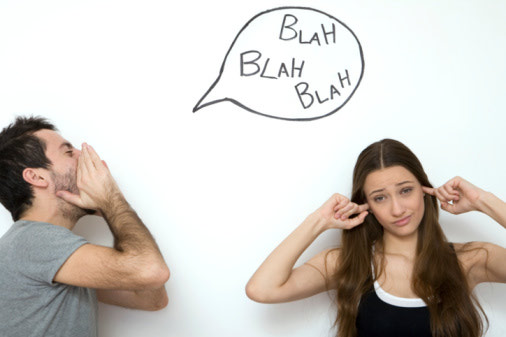 According to Chip Wilson, CEO of 360 Solutions, recent surveys reveal that communication is still an unresolved issue for many companies:

Remember, costs don’t only involve money – they involve other resources like time and energy too – but for simplicity’s sake and easy measurability, we’ll start with bottom-line numbers.

Now that you’ve got a number in mind, multiply that figure by the number of customer miscommunications you have over a twelve month period of time. My guess is that you will be shocked at how much money you are flushing down the toilet through poor communication.

Start off on the right foot

“Communication is a skill that you can learn. It is like riding a bicycle or typing. If you are willing to work at it, you can rapidly improve the quality of every aspect of your life.”

An easy way to start developing your communication strategy is by answering three simple questions:

Here is a chart that details some of the ways my clients tell me they communicate with their customers:

How about some of the ways you communicate with your employees?

*Do you even have these very important meetings?

On a scale of 1 to 10, 10 being the highest, go back and grade yourself and your employees in each category on the level of communication you have with your customers and each other.

If you are not happy with what you find, rest assured that this problem will not go away by itself.

One way to prevent problems in communication is to simply ask the other person to repeat back what you have spoken. This lets you assess whether what you said was heard in the way you intended. If we can do this on a regular basis, we will avoid the surprises that can come with miscommunication.

Other ways are to solicit feedback from your customers and your employees on a regular basis. Accessing the suggestions from the people who understand your organization is perhaps THE MOST VALUABLE type of feedback that can be received. There are a number of ways I help my clients do this and I invite you to contact me for some ideas on how I can help your small business do a better job with internal and external communications.

If you want to make your company more profitable and successful, work on your communication processes, get strategic about them, and design an accountability structure that will support the strides you are making. You will find results for yourself, your employees, and your customers.

Know already that working toward better communication is part of your growth plan? Got 15 minutes on the bus or during lunch? Check out our online training Quickstudy Manager Builder – Start by watching the video below: