E49 On My Own with Dr. Cornelia (Nel) Wieman 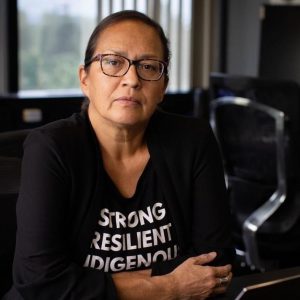 On the wrong bus: A First Nations psychiatrist shares her story growing up in a non-native world and how she reclaimed her indigenous culture as an adult.

Dr. Wieman has served as the President of the Indigenous Physicians Association of Canada (IPAC) since 2016. She is currently an Adjunct Professor in the Faculty of Health Sciences at Simon Fraser University and an Assistant Clinical Professor at McMaster University.

Dr. Wieman is Canada’s first female Indigenous psychiatrist. She completed her medical degree and psychiatry specialty training at McMaster University in Hamilton, Ontario. She also holds an Honours Bachelor of Science degree (Kinesiology) and a Master of Science degree (Biomechanics).

She provided psychiatric services at a community mental health clinic based on the Six Nations of the Grand River Territory for 8 years. She was a member of the National Advisory Group on Suicide Prevention that developed a framework and recommendations addressing First Nations youth suicide. She was the Co-Director of the Indigenous Health Research Development Program and an Assistant Professor in the Dalla Lana School of Public Health, Faculty of Medicine at the University of Toronto for 7 years. She has been a co-investigator on several research initiatives funded through the Canadian Institutes of Health Research (CIHR) – Institute of Indigenous Peoples Health including the National Network of Indigenous Mental Health Research. In 2007, she was appointed to CIHR’s Governing Council. She was the Deputy Chair of Health Canada’s Research Ethics Board. She has served as a Director on many boards, including the Indspire Foundation and Pacific Blue Cross. She sits on the Executive Committee of the National Consortium on Indigenous Medical Education.

For 5 years, Dr. Wieman was a staff psychiatrist at the Centre for Addictions and Mental Health (CAMH) working in various settings including the Indigenous Services Program, Telepsychiatry Service and Crisis Clinic. She was the Founding Director and then Faculty Advisor to the Indigenous Students Health Sciences Office in the Faculty of Health Sciences at McMaster University.

After 20 years of clinical practice as a psychiatrist in rural/on-reserve and urban settings in Ontario, Dr. Wieman moved to BC to take on a leadership role in public health at FNHA. She has focused on the public health response to BC’s concurrent public health emergencies: the COVID-19 pandemic and the toxic drug poisoning (opioid) crisis.

She also works on anti-Indigenous racism – being appointed to the Provincial Task Team to respond to the “In Plain Sight” report as well as Co-Chairing the Cultural Safety and Humility (CSH) Technical Committee that is developing a provincial CSH accreditation standard. She has made frequent media appearances locally, regionally and nationally on Indigenous health, aspects of the COVID-19 pandemic response and anti-Indigenous racism. She has given hundreds of presentations across Canada and internationally, most recently 2 symposia at the World Congress of Psychiatry.

She is an Indspire Achievement Award Laureate (1998), recognized for career achievement in the category of medicine. She was the inaugural recipient of the University of Waterloo’s Faculty of Applied Health Sciences Alumni Achievement Award. In 2013, she received the Queen Elizabeth II Diamond Jubilee Medal.

Dr. Wieman is a nationally recognized expert in Indigenous health issues and all of her clinical, academic, research and advocacy work has always been focused on improving the health and mental health status of Indigenous peoples across Canada.

As a First Nations child “scooped” into a Dutch family, Dr. Nel Wieman grew up struggling with her identity and culture. Listen in on how she grew into her authentic self to become Canada’s first female Indigenous Psychiatrist, now working to uplift indigenous communities.

Dr. Wieman identifies as a Sixties Scoop survivor, where she was taken from her native family in the late 1960s and adopted by a Dutch couple in Thunder Bay, Ontario. Trying to assimilate indigenous children into the general population, her circumstances denied her the opportunities to learn her language or engage with her culture.

Growing up in Thunder Bay as an adopted Sixties Scoop survivor, her childhood was riddled with racism and identity confusion. She didn’t feel a sense of belonging in her adoptive family but learned to redefine school, reserve communities and the places she moved to as home later in life. Working at FNHA, she has been adopted into the Wolf Clan and begins her workday with their traditions.

In grade 1, she was asked to write her birth announcement with details of her birth, which, being adopted, she had no knowledge of. She began to cry but her teacher demeaningly dismissed her helplessness. She became “quite fiercely independent” in response to how different she was in many ways. She carried that self-reliance into her life and work.

She was a competitive track and field elite athlete in high school, which she credits with teaching her about persistence, determination and discipline, but it also made her very self-focussed. When a truck hit-and-run accident landed her in the hospital, she became very aware of her mortality and it made her think about contributing to other people’s lives.

Dr. Wieman’s adoptive father often drove the family up to the Fort William Reserve, exposing her to indigenous people and culture. She felt torn that he had indigenous friends but would not acknowledge her identity as an indigenous person. “You feel like you walk in both worlds and you don’t belong in either”, she recalls.

She shares her experiences of “lateral violence from within the indigenous community” that those who grew up on the reserves with their families and speaking their languages look down upon people like her who don’t. Living in a diverse community in Toronto, she felt more assimilated among the heterogeneous population.

Dr. Wieman claims that she has always been stubborn and determined, persisting in the face of seemingly insurmountable tasks. She has learnt over the years to move from her heavily self-reliant mindset to be able to work and trust others in a team. She has also developed a sense of humour to lighten the dense work she does and to be resilient.

Dr. Wieman has never bought into the hierarchical nature of medicine, where physicians believe that they deserve to be appreciated “just because of their title”. This culture made her feel out of her element during her training and in the early days of her career. Today, she only uses her title to set a positive example for indigenous youth, to inspire them to believe that anything is possible.

The best way to work with Dr. Wieman is to identify “a challenge or a goal that has to be achieved” and provide support. Having a capable team lifts her up and makes her feel comfortable in any situation. She enjoys working with people who contribute equally and help each other learn, be authentic and become better team members and leaders.

Dr. Wieman uses the 7 Generation principle to guide her in life, which teaches that “what we accomplish in our lifetimes, the effects of that will be felt forward like waves until 7 generations into the future”. She acknowledges that her life is the outcome of the efforts of her ancestors, and hopes to do the same for future generations.

Dr. Nel Wieman’s story of being one of the Sixties Scoop Indigenous children adopted into a Dutch family and subsequently becoming Canada’s first female Indigenous Psychiatrist is an amazing journey of courage, determination and service to humanity. A deeply reflective person who knows how to bring both meaning and laughter to difficult contexts and hard conversations, Dr. Wieman offers new insights into how to overcome difficulties and continue our own journeys of finding our authentic selves and learning to belong.

The Good Life with Eric Karpinski

Sink or Swim with Raphael Adegboye